The Mirror Inland Championship was held at Staunton Harold Sailing Club on the weekend of 24th & 25th June. The Inlands continued the seasons trend of healthy and highly competitive fleets; a product of the RYA's support. Despite the grey overcast skies, which threatened rain for most of the weekend, the event was enjoyable featuring tough sailing and a friendly welcome from local members, with the majority of the fleet becoming hardy campers for the weekend.

Race 1 on Saturday saw the adults in the fleet with wise old heads and solid concentration milk the windshifts to lead the chasing pack of youth sailors home for the first time this year. Alan Bennett and Holly Scott finished in 1st place, to be followed by Guy and Ben Wilkins with the Gebhards third. Dave and Jake Gebhard however seemed increasingly at home in the conditions as they won a close fought second race and, in rising wind, race 3 by an increased margin. Close fighting ensured for the rest of the top six positions in races 2 and 3 with the younger sailors coming to grips with the shifty conditions and making inroads into the final three. Juniors Niki and Christian Birrell finished third in race 2 and Youths Toby Heppell and Abby Stodel finished third in race 3. To round off the days sailing those who had any energy left were invited to compete in a crews race. With much swapping of boats and crews and a surprising number of entrants the race was hard fought. Jonathan McGovern finally won from David Saker.

On Sunday what little breeze existed died slowly away. Race 4 was run in very light conditions. A wind shift before the start eliminated the beat: Race 4 was, for the first time in the weekend, fairly processional. Tim and Peter Gray held their lead until the finish despite being pressed heavily by the lightweight Junior pairs of Niki and Christian Birrell and Josh and Judi Gebhard. The postponement of race 5 due to lack of wind coinciding with a glimpse of the sun and led to an impromptu crews football match. An attempt was made to start race 5 but a failure to make the windward mark by any boat led to the race being abandoned to everyone's relief. 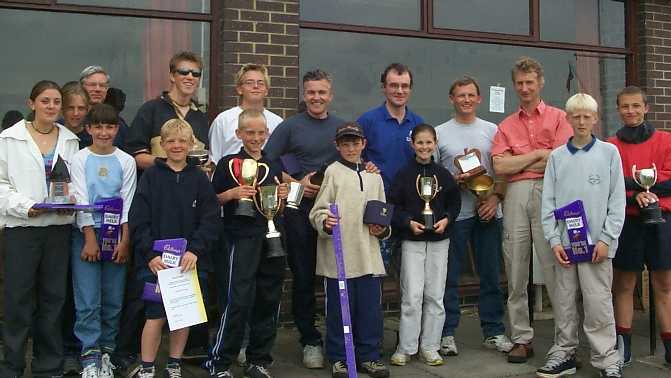