13 boats turned out for the Mirror South West Area Championships at Mounts Bay on 5/6th July. The event was sponsored by Navigators and General  Insurance. A west to north west wind force 2 to 3 occasionally 4 produced a short chop,which made it tricky especially in the lulls.

In race 1 Becca and Ruby Stephens made a good start and led  around the first mark followed by Jeremy Stephens  & Jowen Dyer then Colin and Polly Stephens.

A windshift on the run allowed Jeremy and Jowen to gybe and catch up with Becca and Ruby , the course was shortened to 2 laps which allowed Jeremy to take the win ahead of Becca and Colin. In 5th was Harriet and Helena Watkins from Poole.

Race 2 was a full 3 lap race. which was won again by Jeremy/ Jowen followed by Becca /Ruby. A tussle for 3rd between the Watkins sisters and Scarlett Shepherd and Harvey Martin also Archie and Ollie Hawkins. The Watkins came out in front by the finish.

The final race on day 1 the Hawkins boys got a flyer of a start and led for the first lap. Jeremy managed to slip past on the second beat but the boys held 2nd position to the finish  with Becca managing to get past Colin on the last lap to take 3rd.

Day 2 dawned with the forecast of a bit more breeze which didnt disappoint, though it was variable but generally windier with full planing on the reaches.

Once again a similar pattern to day 1 with Jeremy and Jowen taking the first 2 races. it was all very close and mixed up after that , shifty conditions made for a lot of place changes.

The final race brought some different results, boats who went left up the first beat found some good breeze and came out well in front at the windward mark. Scarlett and Harvey led and were never caught. Martin Egan and Freddie Martin maintained their 2nd spot. The Watkins girls did extremely well but the wind was pretty fresh and Esther Bowdler with Scarlett Cargo got through to 3rd.

A great weekends sailing was had by all, many at their first area championships and should be well pleased by their performance against some very experienced  more senior sailors.

There were many spot prizes for the up and coming sailors which were gratefully received. 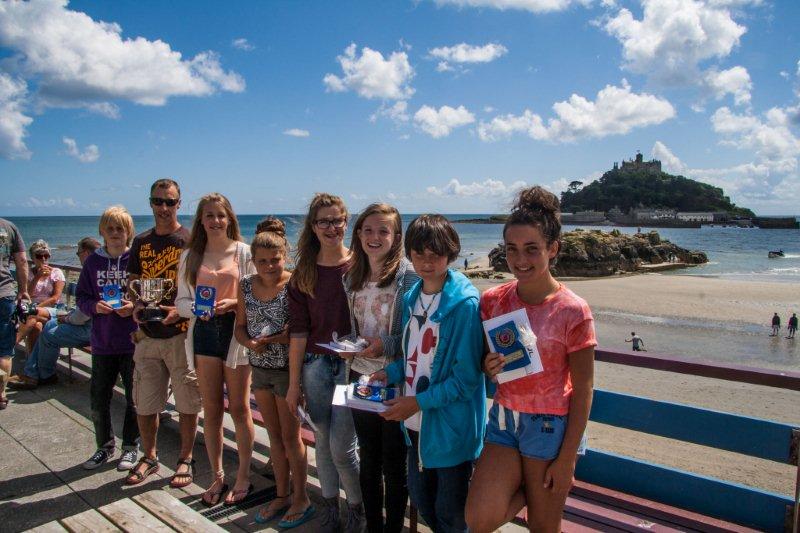 Many thanks to all the volunteers at Mounts Bay who put on the event and to Navigators & General and Gul for sponsoring and supplying the prizes. The final Gul South West Traveller will be held at  Royal Plymouth Corinthian YC on Sunday 7th September.