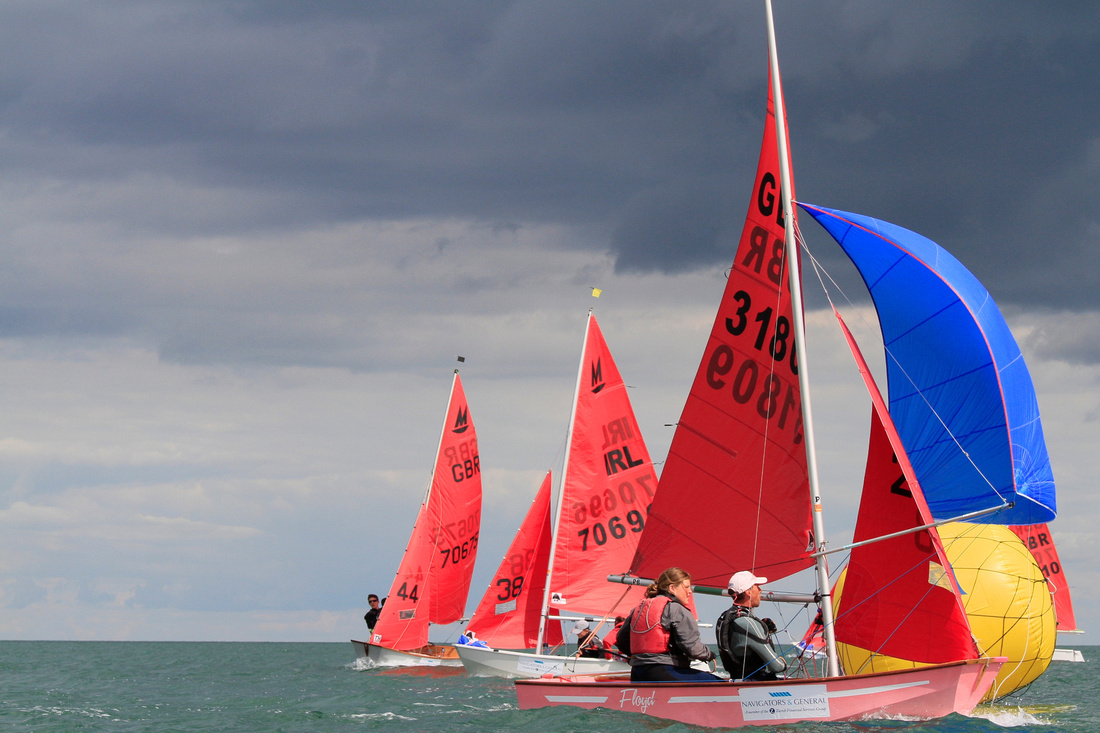 “As inconsistent as the England Cricket Team” was how today’s weather was described by competitors Tom Weston and Paddy Jefferies.

Day three of the Navigators & General Mirror Europeans offered a change in conditions from the previous racing held from Brixham Yacht Club. The forecast light winds presented difficult conditions for the sailors and race committee alike. The Race Officer wisely put in place a 2 hour postponement whilst the sub 5 knot early wind built to a 6 knot north westerly.

In race one more pressure from the top left of the beat resulted in Archie Grant & Johnnie Law just beating Gemma Keers & Imogen Bellfield to the first mark, however the girls converted their 2nd to a first quickly on the first reach and extended away from the following pack. Rachel Grayson & Gemma Francis Burnett made an excellent decision to stay low on the reach to claim a convincing 2nd by mark 2. The second reach saw the pack descend on the leaders in more breeze and some place changes occurring, with Esther Bowdler & Scarlett Crago fighting back from a previous penalty to take the win followed by Gemma & Imogen, Angus Hemmings with son Fraser and Tash & Sarah Ewart-Smith showing good form once again in fourth.

Race two started in a more westerly direction with mirror veteran Martin Egan claiming a brilliant start from the middle of the line. With the left side having looked strong for the majority of the beat, the final right shift allowed Angus & Fraser Hemmings to consolidate their excellent first race with a first place followed by Ireland’s Shane McLoughlin & Oscar Langan with Felix Jefferies & Monty Heath in third. A significant wind shift occurred halfway down the first reach which turned the second reach into a beat however the leaders held their positions to the finish.

The race committee did an excellent job running two races in such tricky weather. They will look to run the lost final race from Wednesday tomorrow with a more promising forecast.

All photos taken by Gareth from Day 3 are on www.boatographic.co.uk here http://gdjfudge.zenfolio.com/p196344265 , from where they can be purchased.