Chipstead Sailing Club hosted the first Mirror Nationwide event of the new season during the weekend of 27th / 28th March. The event is open to all mirror sailors nationally and the club welcomed from as far as Restronguet, Poole and Ripon. Young sailors from the mirror National Youth Squad were particularly well represented as well as a very strong parent and child team, Sarah Richards sailing M70618 “Tinytanic” with her son George, aged 9, from Pennine Sailing Club. In total a fleet of 17 mirrors, including three home boats from Chipstead assembled early on Saturday morning with a full schedule ahead of them.

The weather forecast for the weekend was not promising, with showers on Saturday extending to longer periods of rain on Sunday, accompanied by unpredictable and gusty winds. In the event this was not to be. Saturday morning dawned overcast but bright with a steady force 2 to 3 breeze from the west, with a touch of north. Race Officer, Neil Banks called a briefing at 10:45 and set a challenging course with a clean windward start by committee boat at the Northern end of the lake, enabling the fleet to get underway with a clear fifteen minute leg to the first mark. The fleet was divided into 4 sections to encourage full participation by younger sailors. The Junior fleet, up to age fifteen, the Youth fleet for up to 19s, the All comers fleet and the Single handers.

In the first race, Ross Kearney and Max Odell (M70624) from Northampton took an early lead closely pursued by Alex Lloyd and William Hide (M70437), “Ptwootle II”, from Brightlingsea and Millie Newman and Jessica Rust (M70574), “Blanc”, also from Brightlingsea. Racing continued to be extremely close between these three boats and on the final lap Sarah and George Richards stormed up the final beat to take 3rd place from Newman and Rust. The final finishing order for this race was Kearney/Odell 1st, Lloyd/Hide 2nd, Richards 3rd and Newman/Rust 4th.

After a short break for lunch the Race Officer set two races to be sailed back to back on Saturday afternoon with the wind freshening a shade to a force 3 – 4 from the north west. All competitors were now revelling in the notoriously challenging Chipstead wind shifts which has earned the club a nationally renowned reputation for producing some fine international yachtsmen.

In the 2nd race, Kearney and Odell again took an early lead with fierce competition for the next 5 places. There was a particularly outstanding duel for 2nd place between Lloyd and Richards with Richards coming through to take 2nd finishing only 15 seconds behind Kearney who took 1st place. In race 3 Newman and Rust took the lead with an excellent first windward leg and managed to hold 1st place at the finish with Kearney 2nd and Calum and Rory Mackenzie (M70534), “Artic Donkeez”, taking 3rd. During the afternoon, competition in the Junior and Youth fleets was becoming increasingly compelling with close tactical racing and outstanding spinnaker work. At the end of the first days racing Lloyd and Hide were lying 1st in the Junior fleet with Newman and Rust leading the Youth fleet. For the local Chipstead boats competition was intense in the middle of the fleet, between Ben and Joe Wilkins (M70348), Anna and Emily Moore (M70163) and Melanie Titmus and Katie Clementson (M70222).

At the end of sailing on Saturday, the club hosted a special evening dinner for all competitors, prepared by Shirley Sinclair and visitors enjoyed the club’s special social atmosphere. 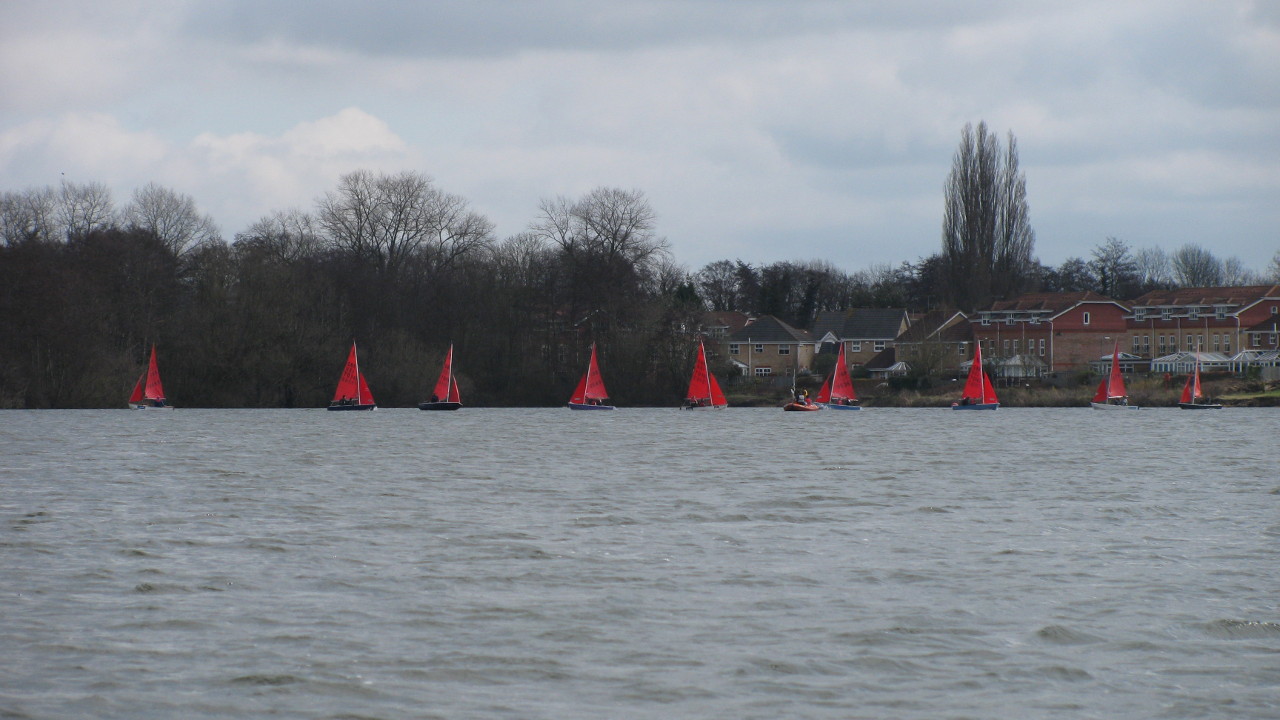 All sailors arrived bright eyed and bushy-tailed on Sunday morning, following the adjustment of clocks to BST the night before. Race Officer Ric Lewis set a course to make the most of the steady force 2 to 3 from the north west and introduced an additional downwind dog leg with two spinnaker jibes. This generated some intense activity among crews and made for spectacular viewing for spectators at the lake side and in the club house. The first two races on Sunday morning were sailed back-to-back, Newman and Rust made an excellent start closely followed by Lloyd and Hide, with Sarah and George Richards 3rd. Kearney and Odell made an uncharacteristically late start but recovered well to eventually finish in 3rd place.

After the 2nd race on Sunday morning, Kearney/ Odell maintained their overall lead with Lloyd/Hide lying 2nd (having won the 2nd won from Kearney) and Newman/ Rust in 3rd.

At lunchtime the appalling forecast of heavy rain had not materialised and the breeze continued to blow steadily from the north west, with short sunny spells. The final raced produced a masterclass in mirror racing with close tactical covering and tight spinnaker reaches. Kearney and Odell led at the start but Newman and Rust came through to lead on lap two, with Richards still a strong contender in 3rd. Competition was also intense for places four to six, with Meia and Elin Harnett (M70536), “Pure Elegance”, and Calum and Rory MacKenzie eventually finishing in 5th equal place. Kearney and Odell came through to win with Newman and Rust 2nd and Richards 3rd.

The fleet had enjoyed almost perfect conditions and this was topped by the guest appearance of double Olympic silver medal yachting champion and Chipstead Club President, Ian Walker who flew in from Portugal to present the prizes. Ian spoke very warmly of his early days at Chipstead developing and perfecting his sailing skills in a mirror and eventually rising up the national and international fleets to become world champion in 1986. Ian also mentioned that he was refurbishing an old mirror to sail with his daughter at Hamble and hoped again to participate in the mirror fleet in the future. Ian thanked the club officials for organising the event and all the competitors for making the journey to Chipstead for the weekend. All agreed that it had been a thoroughly stimulating and enjoyable weekend of racing.