The Crewsaver Mirror Nationwide Trophy 2011 kicked off its season in Scotland at Annandale SC. On Sat 9th and Sun 10th April. There was a good showing of Scottish boats with 9 from the local club and one other, that turned out to challenge the visitors from as far away as Poole Yacht Club. This was also a coached Open supported by RYA Scotland. This meant that the second 50% of the fleet were given guidance and support both on and off the water to help them improve their racing skills.

Saturday was dominated by very light shifty winds tested the skills of all helms and crews. The race officer did a great job to get all three scheduled races sailed in the prevailing conditions. Competition was very close at all levels within the fleet with lots of very close racing taking place. Saturday evening meal was provided by Annandale SC and, given the unusually warm conditions, everyone enjoyed an alfresco meal in the evening sun and helped Sophie Benn to celebrate her 11th birthday over looking the loch. Glorious sunshine greeted competitors after breakfast on Sunday. The forecast was good for the afternoon but not a breath of wind appeared until 12 noon.

With all the results in, Andrew Greenhalgh from the local Scottish club was the worthy winner of a very close fought event, ahead of brothers Matthew & Ben Lulham Robinson from Yeadon/Otley, and mother and son team Sarah and George Richards from Pennine SC..

All competitors agreed that this was a great weekend at Annandale SC, Very close racing, excellent social on Saturday evening and GREAT prizes and support from our major event and series sponsor Crewsaver plus coaching support from RYA Scotland. Thank you everybody!!!!

First Race
Sarah Richards with son George took an early lead then fell into a hole on one of the off wind legs. Matt and Ben Lulham-Robinson came very close to overtaking and then fell back to be piped at the finishing line by Andrew Greenhalgh by literally a few centimetres.

Second Race
Matt and Ben Lulham-Robinson lead from the start with Sarah and George Richards in hot pursuit Andrew Greenhalgh keeping a watching brief in third until the last beat where he spotted a lift off to the right and sneaked through to take line honours with Matt and Ben Lulham-Robinson 2nd and Sarah and George Richards 3rd.

Third Race
This proved to be the lightest race of the weekend and Sarah Richards and George took line honours with Matt and Ben Lulham-Robinson second following a good 3place by Will Hide and Emma Clayton.

Fourth Race
Roy Platford was first to the windward mark and down the first run but was overtaken by Rosie and Midge Watkins from Poole SC. Up the second beat Emma and Rachel Grayson took advantage of a left side shift and stormed into a lead which they held to the finish, followed by Sarah and George Richards second and Andrew Greenhalgh finished third.

Fifth Race.
The breeze was beginning to build and this proved to be a ding dong battle between Andrew Greenhalgh and Matt and Ben Lulham-Robinson with Rosie and Midge Watkins in hot pursuit.and it finished in that order. 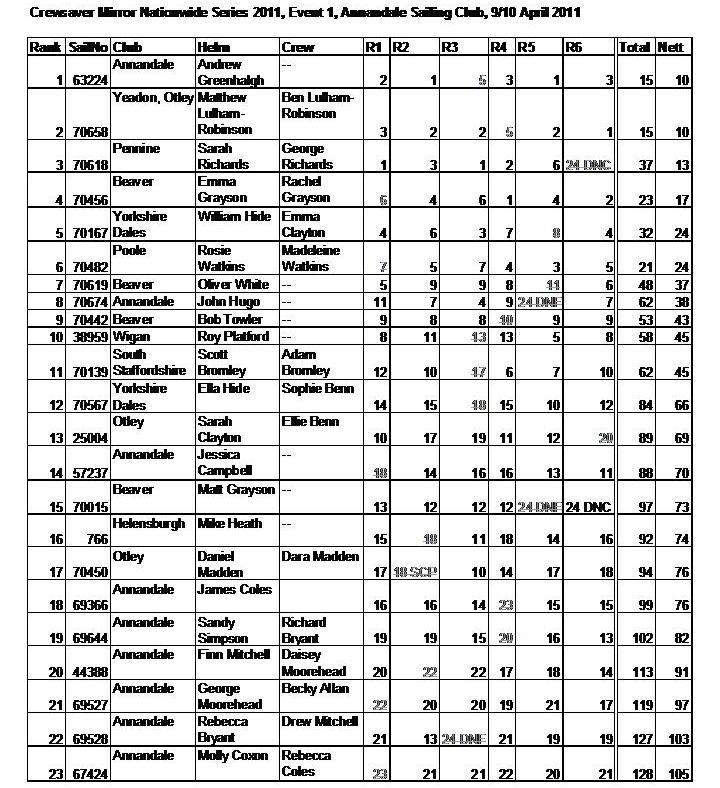 More photo albums from the event are available at: