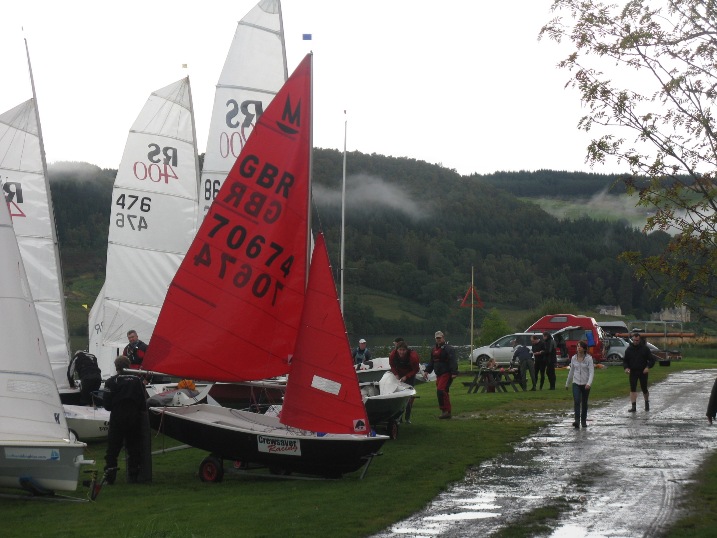 Loch Tummel SC's autumn one day regatta was held on 17th September 2011. This year, by special request, the club offered a Mirror Class start. In the event, only two boats showed up - John Hugo from Annandale, Mike and Caroline Heath from Helensburgh. The two Mirrors were therefore combined into a General Handicap race along with an RS200, Albacore and a Byte C2. The event was also an RS400 traveller and they had a start of their own.

With a low pressure weather system stationary over Perthshire, the prospects for sailing winds never looked good. But nothing prepared us for the reality. The first race started on schedule at 12:00 with the RS400s off first but a general recall was issued. The handicap fleet then started and what little wind there was at that point died completely so we sat in the pouring rain for a while drifting around. The RS200 got away eventually (so they should) but the two Mirrors and the rest of the fleet struggled slowly up the windward leg. Suddenly some wind appeared, but from directly astern (!!), and with some swift spinnaker hoists the Mirrors were away leaving the Albacore and Byte behind. Just as we reached the third mark the rescue boat appeared and lifted it - the OOD had abandoned the race. Then the wind died again and we all paddled ashore.

That was it! We hardly saw another breath of wind and the regatta was abandoned at 3pm. Within 15 minutes, as everyone was packing up a light breeze appeared and a couple of boats got out for some paractice sailing.

So, a disappointing day, but a great venue and thanks to the folk at LTSC for laying on the event and offering us a Mirror class start. We'll be back another time.