The Bell Woodworking building instructions cover the basic fitting out of the wooden boom on page 24.

If you want a more sophisticated fit out, read on. 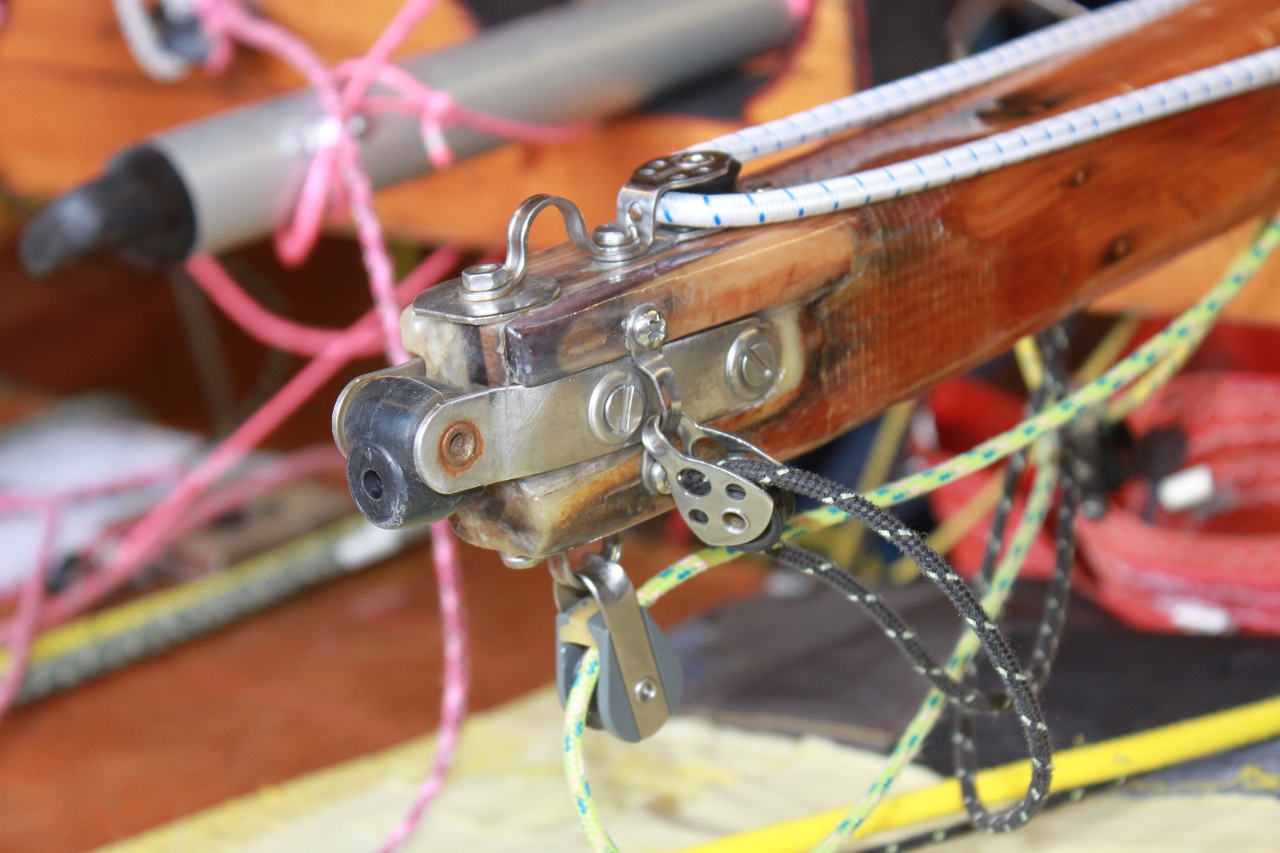 The standard gooseneck fitting was the Holt-Allen 4314. However, this fitting, and a (softwood) boom, has proved to be a bit of a nightmare. The problem is that there is a lot of strain imposed on the gooseneck with the boat fully powered up and the kicking strap on tight (generally pulling the front end of the boom down) with just the gooseneck fitting holding the boom up. It's very common for the screws holding the gooseneck fitting on to cause the boom to split. Some sailors have tried fitting the straps at an angle, so the screws were vertically seperated, rather than being exactly horizontal and aligned with the same wood fibres (and some have one side angled up, the other side angled down,........). Some have tried wrapping a GRP tape & resin bandage around the front end of the boom to try and stop it splitting.

I have tried rebating the straps into the boom to try and spread the load, but with limited success. I also use a pair of long bolts running vertically all the way through the boom to hold on some other fittings near the gooseneck, and these bolts effectively clamp the top surface and the bottom surface of the boom together, making it harder for it to split horizontally. In my case the fittings are a deck eye for the clew outhaul control line on the bottom of the boom, and a cheek block for the flyaway pole retriver elastic and a deck clip for the tack downhaul on top of the boom.

Some Australian Mirrors use a gooseneck pin and just have a hole in the end of the boom.

The issue with the boom splitting was eliminated by the introduction of the metal boom.

Allen brothers make a gooseneck fitting for a metal boom, the A4314R, which is similar to the traditional wooden boom fitting. These are OK, I think, but I have seen severe corrosion of the alloy around the rivets holding this fitting on a Trident-UK boom.

I recommend a plug, with a hole for a gooseneck pin, in the end of the boom. A gooseneck pin will work with a traditional gunter mast gooseneck fitting as well as a Bermuda mast fitting. The only snag with this system is that, with the sails down, the boom can be inclined to slide backwards off the pin, and fall into the boat. A bit annoying. You can stop this happening with a short piece of line loosely tying the boom around the mast.

With the original basic fit out, there was just a deck eye on the top of the boom which the tack was tied to. 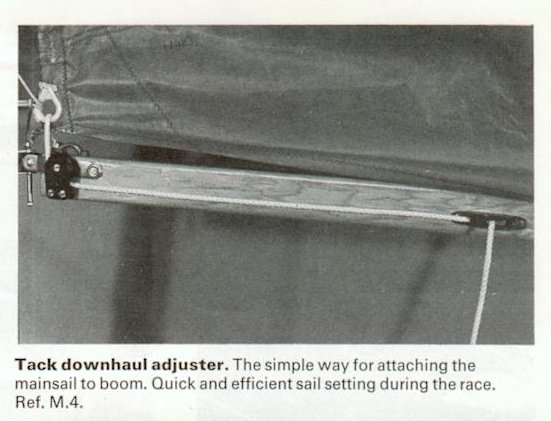 This simple 2:1 arrangement appears in a 1980 spares catalogue, but no doubt had been in use from well before this.

The tack downhaul is one of the mainsail controls commonly led back to the thwart. In this case, a the downhaul goes from the tack directly down to turning blocks on the stowage bulkhead (both sides), and then aft to turning blocks mounted near the aft edge of the daggerboard case and then to cleats.

With the gunter rig, the spinnaker halyard is external and has to have a reasonable amount of 'slack' in the system in order to make it possible to pull the spinnaker up, or down, quickly. This makes the halyard prone to getting blown around and tangled with the gaff jaws, spinnaker pole eye etc. I have found that guiding in through a small block or bullseye fitted to the boom near the gooseneck helps keep things under control (see photo of the gooseneck on 15563 - Blyskawica above, the spinnaker halyard is the thin black rope). 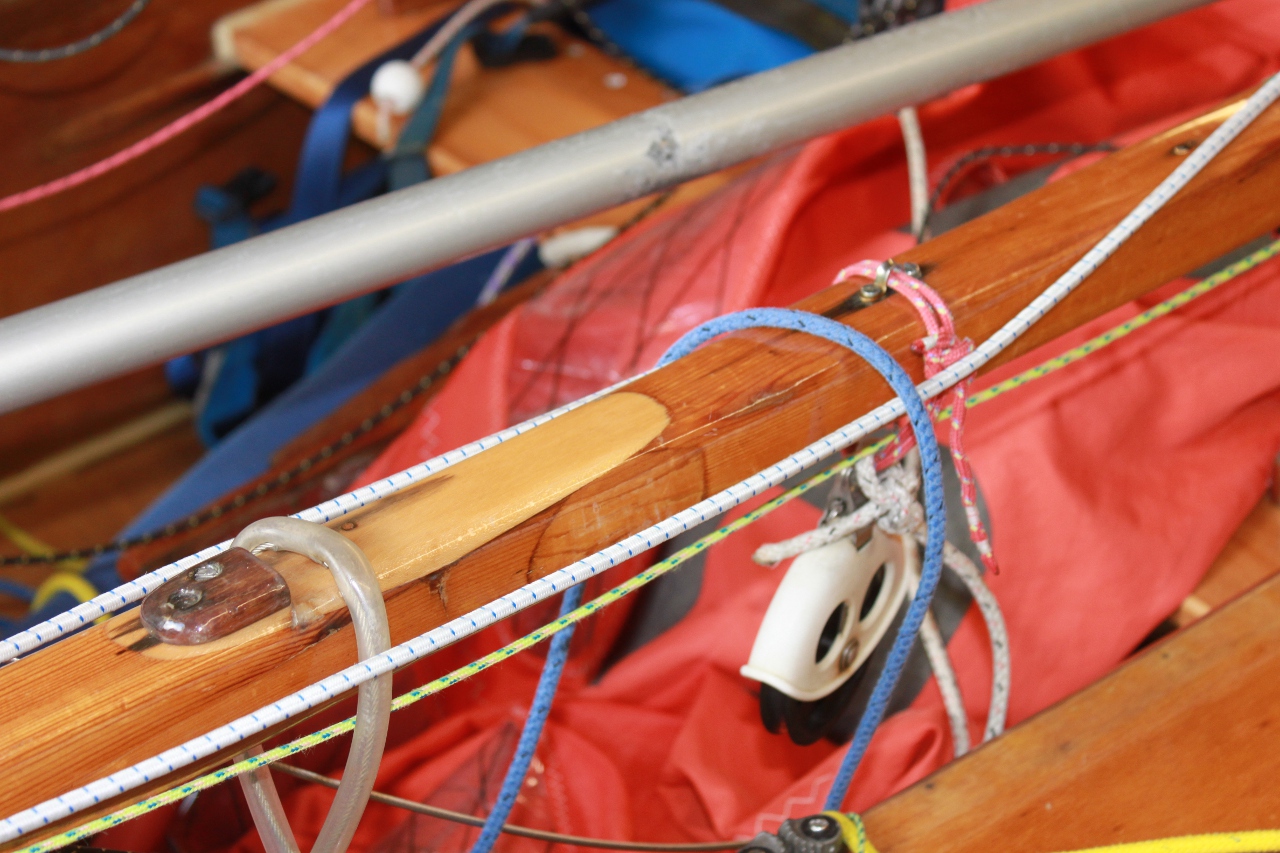 Originally a block of wood fitted to the top of the boom with a loop, spliced in one end of the kicking strap, which the boom passed through. Although this appears quite crude, mechanically it's a strong arrangement since the load is spread over the top of the boom and the fixings on the block of wood are under only a small amount of strain. I still use this on both wood and alloy booms.

With the introduction of the circular cross setion alloy boom, a loop of webbing, fixed to the top of the boom and wrapping around it has become quite popular attachment method.

The rule constraining the location of the kicking stap attachment was removed as part of the change to permit centre mainsheets. This allows the attachment point to be further forward, so there can be more distance between the kicking strap and the mainsheet giving more space for the crew. 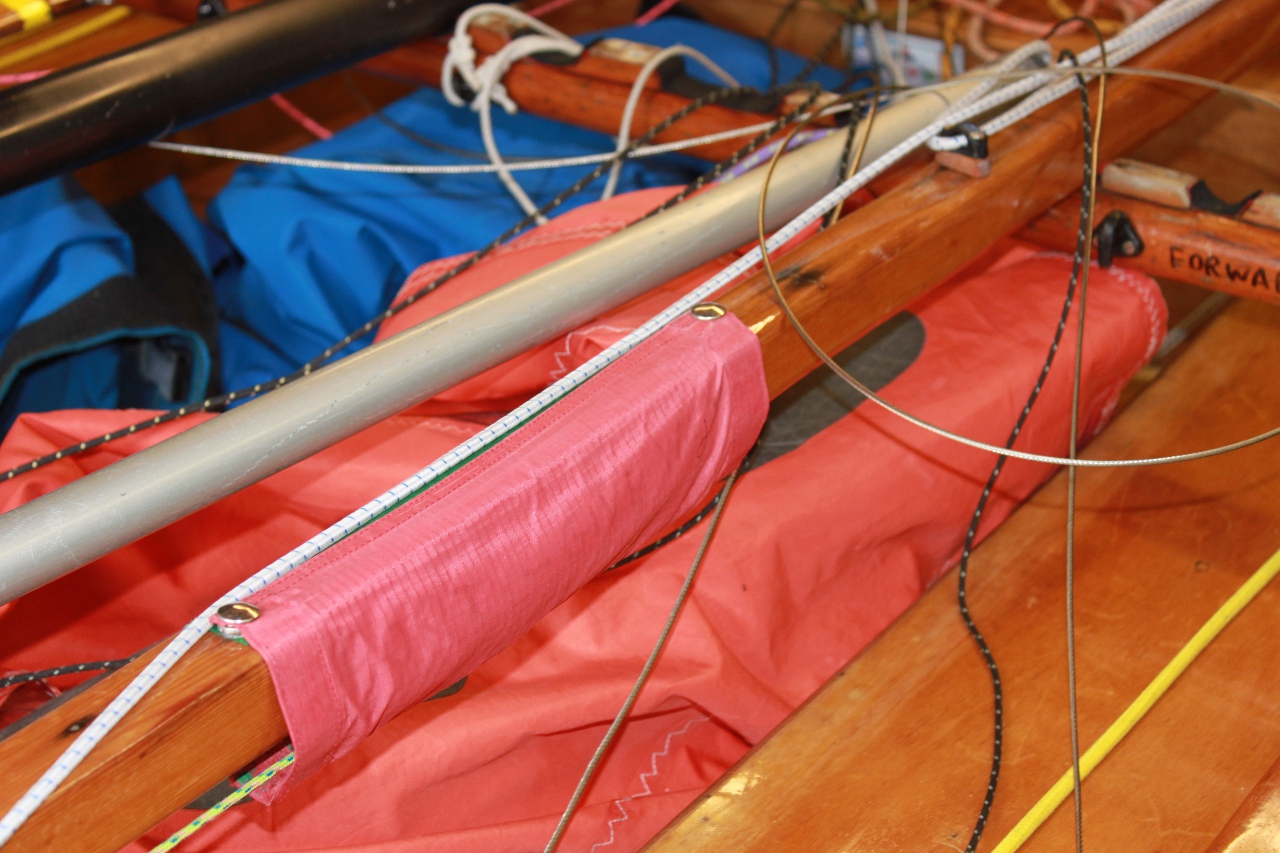 Essential if  you have a centre mainsheet, this stops the section of the mainsheet running along the boom falling down and becoming entanged with the helm's neck.

Originally the clew of the mainsail was tied through a hole in the end of the boom. 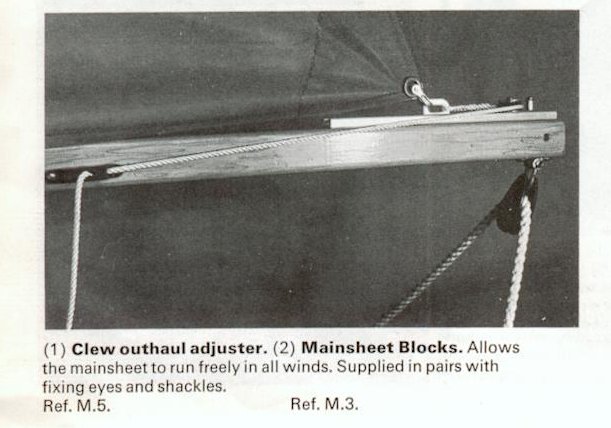 A length of alloy or stainless steel track with a plastic or stainless steel slider was a common upgrade and works quite well. Plastic sliders are prone to break after several seasons use, so need to be checked regularly (2003 National Champions Dan & James Ellis had a slider break which nearly cost them the Championship). Tracks may be recessed into the top of the boom which saves a bit of drag and looks neat.

With the introduction of the circular cross section alloy boom, a lot of sailors use a webbing band around the boom, rather than a track & slider.

My favourate (but rather expensive) system is a length of Harken 13mm Low-Beam Mirco Track HK-2707, say 300mm long, or, if you want to be able to reef your mainsail directly onto the car, you will need it a bit longer, up to 600mm long. A 13mm Micro Traveller CB Car with pivot shackle and control line blocks HK-2701 and, if it's not going to be recessed into the boom, Mirco Line Shedding End Stops (set of two) HK-2706. That's a lot of money, but it produces a lovely, smooth, easy to use system that works whatever the load.