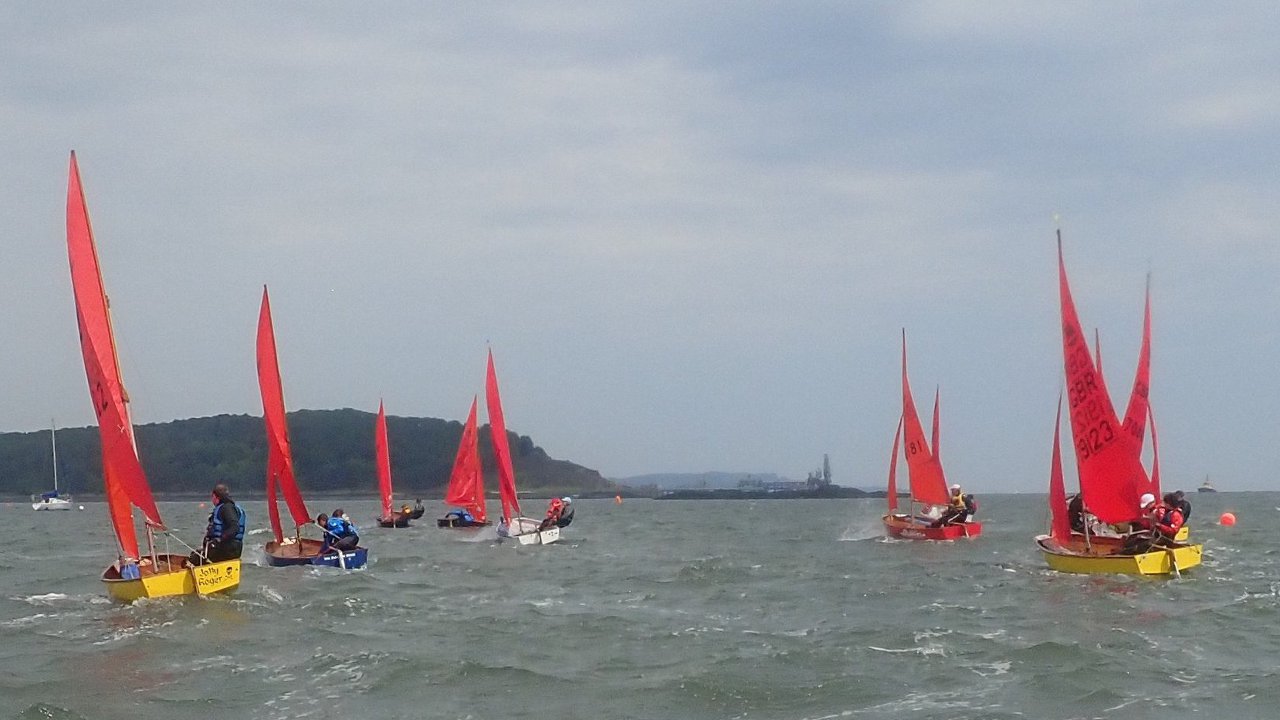 The Scottish Mirror Championship as part of the Northern traveller series was held for the first time since 2014 over the weekend of 22nd and 23rd of June on the Forth at Dalgety Bay Sailing Club.

21 eager Mirror sailors from across Scotland and further afield arrived at Dalgety Bay on Saturday morning to a gentle breeze, sun and warmth. The majority of the fleet were parents sailing with their young children as crews. The youngest of which was 4 and some who had never raced or been afloat for more than 30 minutes at a time. Some sailors remembered sailing Mirrors against other members of the fleet in their younger days. The boats also varied from the latest Winder boats to some boats which were probably older than the sailors.

Our only junior pairing was made up of Ben Homer and Jamie McKeating(from the host club) who decided to give a borrowed family member's boat a go having not done much sailing together before and Jamie having never used a conventional spinnaker. Our only youth and single-handed sailor was Sandy Simpson.

The racing was started promptly at 1pm in a 5-8 knot Easterly breeze. The course set was a traditional Triangle/Sausage course. The leaders of the fleet, Sandy Simpson and Fiona Spence with son George as her crew, quickly established themselves as the people to try to be near all weekend having substantial lead over the rest of the fleet until the 4th and final race of the day when the tide had turned and being inland sailors forgot to take this into account. The local sailors had an advantage and stayed inshore out of the strong tide. At some point during the afternoon one of the young crews managed a nap and was rudely awoken by his Dad Martin tacking a little too vigorously! After prompt races throughout the afternoon everyone returned to shore for socialising and a BBQ. The younger members of the fleet taking advantage of the open grass area whilst the adults watched and enjoyed the conversations on the decking.

Sunday dawned with a gentle breeze blowing from a similar direction as Saturday. Again, Sandy and Fiona led the fleet around the course using the right-hand side of the beat and tide to their advantage. The fleet sailed 2 races back to back and returned to shore for a quick lunch break before heading back out to an increase in wind. This saw positions change at the front of the fleet. Sandy found the increased wind more challenging being single-handed and chose not to hoist his spinnaker on the first down wind leg of the course as did a number of other helms with their young crews on board. At the gybe mark some of the fleet decided it was sheltered enough for a hoist. With the increase in wind the PRO Gavin Homer decided to give the fleet an extra sausage in the 8th and final race of the weekend.

The fleet headed ashore on completion of racing to pack up boats and keep tired crews awake long enough for the prize giving. One young crew on his way past the committee boat was heard to say 'This has been the best weekend ever!'.