Hillhead SC welcomed a huge turnout of 43 boats most of whom dared to brave the F6 winds and the large 'Solent chop' to start the first race. Locals John Pink and Tom Weeks, ex Mirror sailors, now 29er European Champions, took the best start of the fleet but having not sailed a Mirror for a few years were soon overtaken by Rob Grieg-Gran and Jonny Telford. Lucy Macgregor and Nerissa Booth followed with Guy and Ben Wilkins also chasing. On the second beat, Matt Burge and Chris Doe in their brand new boat moved up through the fleet, as unfortunately both John Pink and Lucy Macgregor were forced to retire due to gear failure.

The second race saw the wind ease slightly, but a huge shift to port just before the start meant that you now could not even lay the start line. Guy and Ben Wilkins made the best of the first beat and were round the buoy first, closely followed by Elliot Jago and Ben Arscott from Plymouth. Craig and Mitchell Bond came round third and with massively superior downwind speed soon caught the leaders. The next beat saw Rob Grieg-Gran tacking up the shifts on the right hand side of the course while Craig Bond following a local tip-off banged left. Craig Bond went round the mark a long way ahead while Rob Grieg-Gran now led the rest of the pack.

Third race saw Rob Grieg-Gran again in the lead this time with Will Glanville and Ed Grieg-Gran following him. But soon Matt Burge and Elliot Jago had taken second and third place. Niki and Christian Birrell followed closely behind, certainly favouring the lighter winds following a capsize in the first race. The positions stayed similar throughout the race, but only 100 yards from the finish line, Elliot Jago's gaff came down forcing him to retire from the race. Matt Burge finished second, Will Glanville third.

Sunday brought totally different winds; from the opposite direction and a lot lighter. General recalls were inevitable as a huge tide pushed boats over the line. Tim Gray and Simon Foskett came off best from the start and led the fleet, closely followed by Craig and Mitchell Bond and Rachel Wigmore and Selena Knight. But when the foot of the sail came undone from the boom at the bottom mark, this put the girls out of contention for the top places. Rob Grieg-Gran followed in forth place, but with good upwind speed came round the windward mark just behind Tim Gray who still led. But the next beat was enough for Rob Grieg-Gran to take first place in the race and he now had the championship in the bag.

Race 5 saw Matt Burge pulling out a huge lead over the rest of the fleet while Tim Gray led the rest of the pack. This was also a good race for Andrew Blundell and Kate Evans who were third at one point. As Rob Grieg-Gran limped into shore following a collision just after the start, Matt Burge won the race with a 2 minute lead with Tim Gray second. Ben Haughton and Darren Roach came in third.

Tea was then enjoyed by all in the clubhouse. Thank you to Hillhead SC for putting on such a great event. 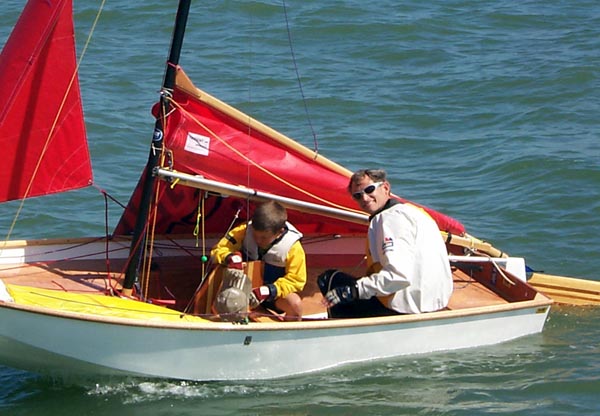 Hill Head is tidal and race start will be delayed if there insufficient depth of water for the committee boat.

Racing will take place on opentidal waters immediately to the south of the Club. The Clubhouse comprises a lounge with balcony overlooking the Solent, bar, changing rooms and showers. Food will be available for competitors and spectators during the day.