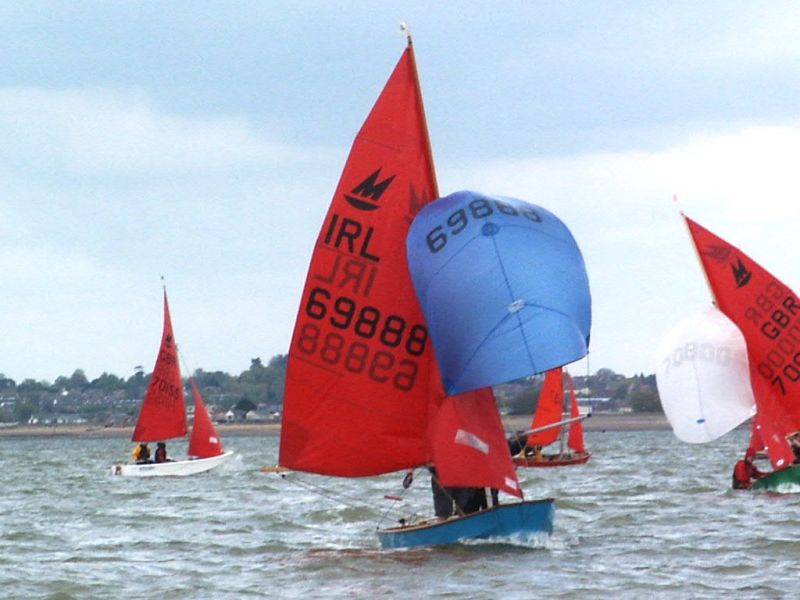 Brightlingsea Sailing Club hosted the Mirror National Championships over the May Bank Holiday weekend. A large entry of 72 mirrors from all over the UK and Ireland were treated to some exhilarating sailing with gusts on the Sunday registering 30 knots. Seven out of the eight scheduled races were sailed with one discard allowed.

Race 1 was won by Alex Kaiser and Robin O'Mahony followed by Josh and Judy Gebhard and Stuart Bithell and Holly Scott came in third.
The first two places in race 2 were the reverse of race 1 with the Gebhards taking first place, Kaiser and O'Mahony second and Bithell and Scott again third. A pattern seemed to be emerging.

Race 3 saw Kaiser and O'Mahony get their second win with the Gebhards again second and a new pair of Ian Dobson and Andrew Hall showing good boat speed coming third.

Sunday dawned with a force 4 to 5 the race office postponed for 15 minutes but eventually got the mirrors away Dobson/Hall recorded their first win with some superb heavy weather sailing. Craig and Mitchell Bond came in second and Bithell/Scott got their third place again.
Race 5 was sailed in force 6 and again Dobson/Hall showed everyone how to sail a mirror in heavy winds with their second win of the series, second was Andy and Katie Macgregor and third place went to Steve and Juliet Long. The Race Officer cancelled race 6 on the advice of the coastguard due to worsening weather conditions.

Monday dawned with the championship wide open with up to six boats still in with a chance of winning.
Race 7 saw a first win for the eventual under 15 champion of Dan and James Ellis, this was even more remarkable as they had to spend most of Saturday night repairing a large hole in their mirror, The Gebhards finished second, closely followed in third place by their father Dave and their younger brother Joric.

Race 8 saw many boats being black flagged with the Irish team of Kaiser and O'Mahony being one of those disqualified. This ended their chance of becoming National Champions. First place went to Andy and Katie Macgregor second was Katie and Anna MacKenzie and third was Bithell and Scott again.

This meant that Dobson and Hall from Burwain S.C. were worthy champions of the 2002 Mirror Nationals. The consistent results of Bithell and Scott gave them second place overall, with Kaiser and O'Mahony coming third.

* DSQ. Four boats were disqualified from both Sunday races after being protested by Alan Bennett for having unmeasured sails.

* As the Arthur Birt Trophy is missing, the Western Trust Trophy was presented instead.

This list is for keeping track of the trophies. As it is the Helms who are generally MCA members, these are the names that we are tracking.