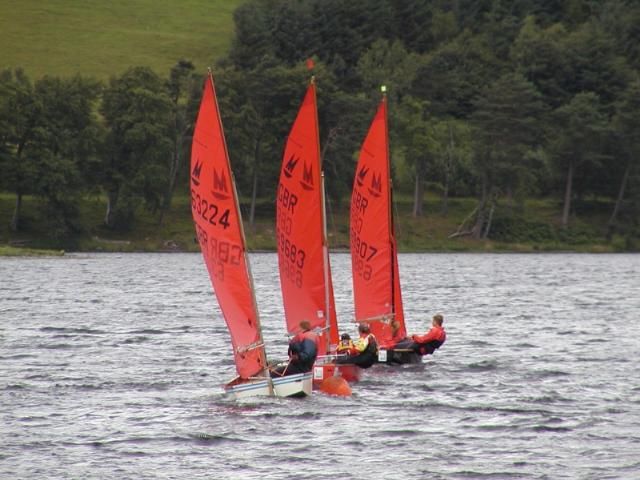 Mirrors came to St Mary's Loch in the Scottish Borders from as far as Lancashire in the South and the Shetland Isles in the North, for the Scottish Champioinship on July 20/21, making up a fleet of seventeen boats.

There were flukey conditions all weekend, but a good variety of wind strengths from flat calm to 20 knots. At the front of the fleet there was plenty of competition among the Team GBR members especially, as they tuned up for the Mirror Europeans in Holland.

First race went to Stuart Bithell and Holly Scott, from Hollingworth Lake, before their fellow club members, Jonathan McGovern and Nicola Brook took the second race. Also close to the front were Katie and Anna Mackenzie, from Windermere, plus the leading singlehander, Andrew Greenhalgh, from nearby Annandale. The wind rose to 20 knots for the last race, and Blithell planed to a second win, ahead of McGovern in second.

On Sunday it was back to light, patchy winds, but a third win for Blithell in the fourth race left him well placed, before making sure of the Championship with a fourth win in the fifth race. McGovern and Mackenzie meanwhile, were having very close racing, both taking a second and a third in Sunday's first two races. In the last race, Blithell again underlined his credentials with a fifth win, and McGovern in second made sure of second overall, ahead of the Mackenzie sisters. Singlehander Andrew Greenhalgh continued to be up among the leaders, and took the top singlehander title with a string of top five places.

The event was well supported by local boats, of which six sailed, and the top local boat was sailed by Charles Willoughby, making his first outing in Mirrors for over twenty years, not to mention his first ever encounter with a Mirror spinnaker!

Report by Alan Henderson, who has a huge range of pics of the event for sale, contact for details at This email address is being protected from spambots. You need JavaScript enabled to view it.