Jack Kenealy and others 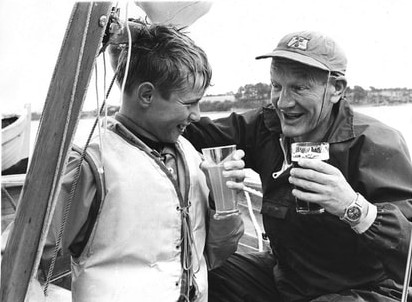 The story was recorded by daily reports in the Daily Mirror Newspaper, so report text is © Trinity Mirror, permission to reporduce here applied for. Also thanks to the www.britishnewspaperarchive.co.uk .

Partridge family photos (kindly shared by Graeme Partridge) which I think are all from this event. These are clearly professionally shot, so may be © the event photographer

The championship for the Daily Mirror European Trophy—is decided on five points races, one every day until Friday.

This appeared in the Belfast Telegraph Tuesday 28th July 1970, page 15

The Mirror dinghies had a rough first day out at Wexford for the start of their World championship event, with a strong south-westerly wind gusting up to Force 7 at times. At least four masts were broken. a lot of gear damaged and at least one hull split open. There were also many capsizes, and only 27 of the 54 starters finished. The winner was John Taylor of Llandudno in 'Ace of Diamonds'. with R. Partridge, of IPCYC second and clubmate Peter Barnes third.

This appeared in the Daily Mirror, Wednesday 29th July 1970, page 2

John Taylor and his wife Lesley, from Quedgeley, Glos, are heading for their first Mirror Class European dinghy championship at Wexford, Eire. The Taylors yesterday had their second successive win in the championship. which is decided on five races being held one every day until Friday.

This appeared in the Belfast Telegraph Wednesday 29th July 1970, page 14

John Taylor, of Llandudno, won his second race in the European Mirror dinghy championships at Wexford yesterday. The result for second and third places was also the same as on the first day. with Roy Partridge of IPCYC second, followed by clubmate Peter Barnes. Deborah Bell, of Lough Neagh, is the leading Irish boat to date with 16 points overall.  The leaders have 11. 4 and 6 respectively.

A thrilling race yesterday opened up the battle for the Mirror Class European dinghy championships at Wexford, Eire. Roy Partridge of Winchmore Hill. North London, and his crew Trevor Smith. 13, have shot into the overall lead. They were beaten by one yard yesterday by Graham Bell, 22, and his brother Chris, 13. But they now lead the seventy competitors with six points.

John Taylor, 26 and his wife Lesley 23, from Quedgeley, Glos. are in second place with 7½ points and are favourites to win the solid silver Daily Mirror trophy.

The Championships are decided on five points races one a day from Monday to Friday.

Britian has won the Mirror Class European dinghy championship, held by Sweden for the past two years. Victory was assured when Britons took the first three places in yesterday's race at Wexford, Eire. Roy Partridge of Winchmore Hill. North London. and crewman Trevor Smith won the race to hold their overnight lead. Ted Wilson and his wife Kay of Nottingham came second and John Taylor and his wife Lesley of Gloucestershire came third. The final race today will decide the winner out of Partridge, who leads with 6¾ points, and Taylor who is on 10½ points.

Friday's racing - Beer and Pop for the Dinghy Champs

By Jack Kenealy, this appeared in the Daily Mirror, Saturday 1st August 1970, page 7

The new champions in the European Mirror Class dinghy competition called for beer and orange pop to celebrate their victory yesterday. The beer was for 45-year-old Roy Partridge, of Winchmore Hill, North London. The pop was for his crewman - Trevor Smith, of Hayes, Middlesex, who was also celebrating his thirteenth birthday. They beat off all challangers in their dinghy "Iver's Bird", yesterday for a thrilling win in the final points race. And this gave them an overall total of 5½ penalty points for the four rounds over an eleven mile course at Wexford, Eire. Their nearest challengers were the Taylors - John 26, and his wife Lesley, 23, from Quedgley, Gloucestershire in 'Ace of Diamonds' with 7½ points. Peter Barnes of Hayes, Middlesex, came third in his dinghy 'Medusa' with 15 points. Last night Roy Partridge was presented with the Daily Mirror silver trophy by Mrs. Patricia Curtis, wife of the commodore of the Wexford Sailing Club. Winners of the points race every day received a British Rail Sealink Trophy. More than 70 competitors from England, Ireland, Scotland, Wales, Denmark and Sweden took part in the championships.

A Coventry man and his wife sailed to fourth place overall in the European Mirror Dinghy Championship in Wexford, Eire. Mr. and Mrs. Edward Wilson, of 2, Brinklow Road, Binley, in their dinghy 'Griddlebone' were competing against 66 other craft. Mr Mr. Donald Clements, of 23, Malvern Road, Balsall Common, was ninth in 'Double Dutch', with Mr. William Stammers, of Nuneaton, as crew.

Results, some derived by logic (i.e. like Sudoku), 5 races, 4 to count

Tributes to the Wexford Sailing Club and to the amenities the town had to offer the visitors were paid by many people who came here last week to participate in the European Mirror Class Dinghy Racing Championship. The championship was the biggest sailing event ever held in Wexford Harbour, and the Wexford Sailing Club can feel very proud that their arrangements won praise from the youngest to the oldest competitor, from the officials of the Mirror Association and the sponsors of the event. The social programme for the visiting crews, their wives and friends also met with general approval.

British Railways presented nearly £300 worth of valuable trophies for the Championship, and there were also prizes from South Eastern Regional Tourism Organisation Ltd. The overall winner was "lver's Bird," owned by Roy Partridge of the I.P.C. Yacht Club, Buckinghamshire. who had two firsts and three seconds. The best overall placing of the Irish competitors was "Tam Pudden” sailed by 19-years-old Miss Deborah Bell and crewed by eleven years old Miss Gillian Heap from Loug Neagh Yacht Club, which was seventh. "Michelle" sailed by Michael Donohoe. of Redmond Road, Wexford (a member of the Wexford Sailing Club) and crewed by Miss Darina Alton, 19 Temple Gardens, Rathmines. Dublin, was the best of the "host" club boats.

Miss Alton and Mr. Donohoe were members of the Irish team that was placed fourth in the international team race sailed in conjunction with the Championship.

The trophies were presented to the winners at a function in White's Barn on Friday night and there was a splendid attendance. Dr. B. Curtis. Commodore of the Wexford Sailing Club, who presided, welcomed the assembly, and said it was a great pleasure to see so many competitors from various countries participating in the championship, particularly the young ladies who came all the way from Scandinavia. Mrs. Curtis, wife of the Commodore, presented mementos of the occasion to the Scandinavian competitors, the sisters Miss Karin, Kristina and Ingrid Sandberg from North Gothenburg. Sweden.

The Commodore thanked British Railways for the five magnificent trophies which they presented for the championship, and these were handed over to the winners by Mrs lames Trainer, wife of the Chairman of British Railways in Ireland, who warmly congratulated the winners. The other prizes were then Presented by Mrs. Curtis.

Speaking after the major trophies bad been presented, the Commodore said the week would be a milestone in the development of the Wexford Sailing Club It was a week which was preceded by lot of hard work and planning and which, when it did arrive. called forth from their members a devotion to the club in time and effort which, he thought, was a very large contributory factor to the success of the venture. He thought at would be generally agreed that the venture was indeed a great success. On behalf of the club, he thanked the competitors for coming. They were a sporting, good humoured group, and were easy to look after.

The Commodore said he felt the club members deserved his thanks for the way in which they supported the club. He thanked the ladies for the trojan work they had done under the chairmanship of Mrs. Mary O'Rourke. He thanked the lady junior members also. He thanked the crash boat crews, the beach workers, the "bar crews" and those who helped to carry out the one hundred and one odd lobs that such an undertaking involved. He had a special word of thanks for the "big five"—their great effort could not be let pass unnoticed—the Mirror Association, Brian Thomasson, and the Irish Mirror Association under Norman Long and Padraig O'Carroll, who took a great interest and helped from the beginning. He thanked the Daily Mirror, the cross-channel newspaper which started the whole idea of the Mirror dinghy and who sponsored the European Championship and had invited them all to enjoy their hospitality at that night's function.

Concluding, the Commodore expressed the wish that an the visitors had enjoyed their stay in Wexford and would carry away with them happy memories of the occasion and that they would not forget to return for a longer stay in the future.

Dr. and Mrs. Curtis were then presented with a Mirror Dinghy Association tie and floral bouquet, respectively, by Mr. Brian Thomasson and Mrs. Thomasson.

Presentations were also made to Mrs. Mary O'Rourke who received them on behalf of the ladies committee.

Mr. Norman Long, Chairman at the Irish Mirror Association, said the event had done more good for Mirror sailing in Ireland than anything else that could possibly have happened. He thanked the Wexford Sailing Club for what they had done.

Mr. Long presented Dr. Curtis with an appropriate memento the European Championship occasion for the club by which they would always remember the great event.

A very enjoyable dance followed and the music was provided by The Generation, leader Louis Doyle, Wexford.