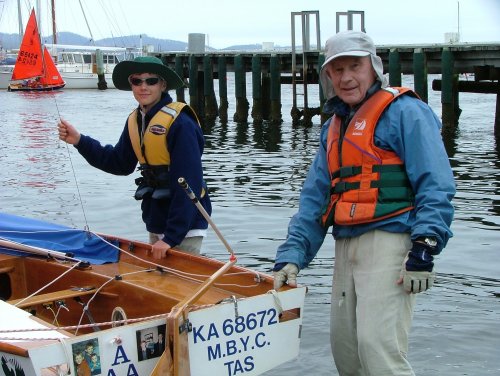 The Mirror family learned this morning of the death of Norm Deane. The notice in the Hobart Mercury records a loving family man, just shy of 95 years old, a Member of the Order of Australia. But we need to record publicly the debt we as Mirror sailors owe him. At the 4th World Mirror Championships in Sligo in 1987 a committee with Norm as President set about the task of making the Mirror a truly one design boat with International status, with a constitution and Rules of Measurement acceptable to the IYRU. International status was formally granted in November 1987. Norm remained active in the International executive until 2008.

The first record I can find of Norm in the National competition is 1975 when he came 45th in Quo Vadis 18256. He was a late starter to the sport of sailing but a quick learner. In 1976 he was back with a new boat, Thoth, in a fleet of 102 entries and he came 7th. He would go on to win the World Master’s trophy in 1997 and 1999. Thoth made a lasting contribution to competition in Australia after she was destroyed in a railway accident. Norm made of pyre of the remains and interred some of the ashes in a tiny wooden urn. This became the trophy for a fiercely contested cricket match played for many years at National competitions.

However, Norm’s greatest gift to Mirror racing in Australia was his example of co-operative development. He showed that the best way to improve was to encourage and help others to improve with you and as competition grew sailors found new ways of sailing better and faster. It found worldwide endorsement when Guy Wilkins in his 1989 handbook on Mirror Racing paid tribute to the Tasmanian philosophy of mutual help.

We extend our sympathy to his wife Jean and his family on the loss of this remarkable man. Thank you for allowing us to share in his life.

We have 1113 guests and no members online