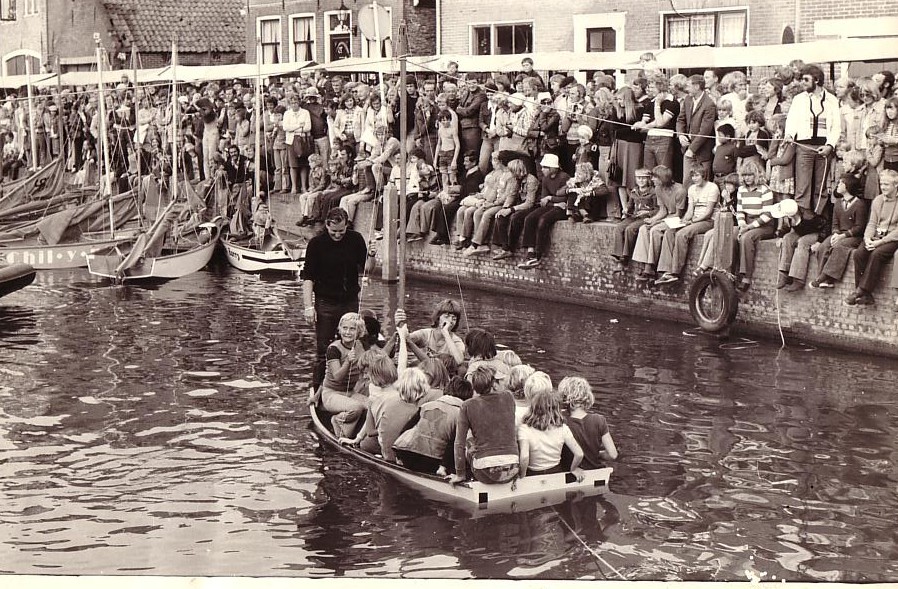 THE more elder statespersons amongst you, can recollect, no doubt, that in the December ‘73 edition of Reflections I recounted our first visit to Monnickendam. Ever since then, there have been three words on my lips - ”I shall return”. The opportunity arrived with the International Mirror Week, and by sending my wife out to work for B.R., the means.

Arrangements were made well in advance for accommodation with a Dutch family, who as it turned out, were very involved with the smooth running of the International Week. Our host, Roel Nuberg was the Beachmaster, wife Henny was dispensing coffee and sannies most days and small son Roelof was crewing for the Dutch National Champion.

Leaving Bristol on the evening of Wednesday 28th July, and, after camping overnight near Harwich, we caught the noon car ferry, arriving at the Hook of Holland about 18.30, Thursday.

Driving off the ferry we spotted Peter Taylor in front of us, but unfortunately he hadn’t studied the course board very well and somehow appeared driving down a cul de sac, on the wrong side of a canal. “Bye bye” we all called to him. However, somehow he received a favourable wind shift, because 20 minutes later at Den Haag, we almost collided with each other at a Tourist Information Centre. It appeared that I also had been driving in ever-decreasing circles.

Eventually, after finding the correct route, we arrived at Monnickendam, and, not wanting to disturb our hosts at an unearthly hour, pitched the tent. The following morning after booking in, we found Mr. Nuberg and settled into our digs.

We were totally unused to the climatic conditions encountered during the next three days - it was raining. This was the first rain that had fallen in Holland for weeks and it just had to fall during my holiday. 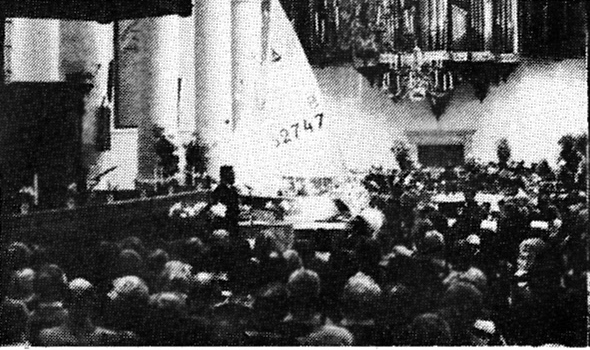 Saturday evening brought the start of the Social events with the Civic Reception at the Old Dutch Church in Monnickendam. After speeches by the Lord Mayor and other dignitaries a very remarkable thing happened. A band composed of Monks (strange that I spotted two females in the band - must be mixed monks!) struck up with Clochmerle type music and we had the sight of couples dancing around merrily in the aisle. After leaving the reception, the majority of people gathered in the marquee for impromptu entertainment, with some of the National teams doing their thing. The Australians sang several folk songs and the Dutch and Maltese also performed musically. Unfortunately the British team were slightly depleted, with several members having an early night. Their gallant attempt at “Old Macdonald had a Farm” resulted finally in “Old Macdonald having a job making himself heard” and things broke up a bit chaotic.

On Sunday, the racing commenced. No doubt there will be results and reports elsewhere in Reflections, so I have no need to mention those. Suffice to say, that Chil-y-nik came within nine places of winning a prize. Perhaps one day . . . ?

Sunday evening, we all went to Volendam, a small, picturesque town, just up the road from Monnickendam. The Daily Mirror sponsored and organised an evening of entertainment at an hotel there. It was tremendous, with space at a premium on the dance floor. The band was the best I have seen for a long time, with a trumpet player who was a refugee from the Dutch Swing College Band, and I think that those that saw him will agree that ‘refugee’ is probably the right word. He was sort of . . . well short with long hair and . . . boots and . . . well um . . . WEIRD? He could play the trumpet though.

Vic Shaw and Norman Long performed in their own inimitable style with classics like “Pretty Polly Perkins” and another which was so good I just can’t remember it! After that, Henk Hoveling produced a grand piano out of his pocket and proceeded to jazz things up a bit. Great playing Henk!

The following evening, Monday, brought a film show by the Canadians. One of the films screened was a 16 mm made especially to demonstrate the “Easy to build. easy to sail” qualities of the Mirror. It was pretty good, with some very amusing (we were all new to sailing once upon a time!) sequencies. Copies of this film are available at a ‘small?’ fee.

The weather brightened up on Tuesday, just in time for the Do-it-yourself barbeque at £2.50 a throw. Collecting our plates containing a pork chop, beefburger, sausage and kebab kit (bits of veal and skewers) complete with a container of sauce, we hunted for a spare piece of glowing charcoal. There were half-a-dozen fires around the outside of the Mirror Pavilion and with the huge number of participants, many an International incident was narrowly averted. It was possible to turn someone elses kebab or even eat someone elses sausage, all by mistake of course. Somehow the noshing part passed safely. Two ‘free’ drinks were included in the price, and I succeeded, for the one and only time during the week, in obtaining an “English” beer, instead of one to which the “two fingers of froth” rule applies.

Here is a video of some amateur 8mm footage from the event kindly posted on Facebook by Willem Holle. (source was WHOriginal Fotografie)

Wednesday was a free day for the ‘B’ fleet, but for those who wished to take part, a Treasure Hunt type of event had been organised. This provided the most exciting day to date. All the Mirrors were lined up on the beach and helms stood with sails under their arms. A Le Mans type start then ensued, with all sorts of excuses passing as a fully rigged Mirror. We sailed across the water to Marken and here, after mooring in the harbour, we received further instructions. With questions to answer, a map to follow, and the most ugly souvenir under 40 pence to purchase, people must have thought we were all mad, dashing around in boiling hot weather. With my answers hopefully correct and a cold, wrinkled-up sausage as a souvenir, we sailed off to the OCE barge somewhere on the horizon. A quick can of coke there and then we were all chasing a motor boat, whose occupants were throwing hundreds of lettered blocks of wood, into the water. Grabbing as many letters as possible, from the water and from under the noses of the other 40 odd Mirrors hurtling around, we had to make up an English word using as many letters as we were able. The winners of this section somehow by fair means or foul, made the word ‘Underwatersportswoman’. Finally we sailed into Monnickendam Old Harbour, and what a welcome we had. All of Monnickendam must have turned out, cheering and clapping. At the side of the harbour was a street market with about 40 stalls selling antiques, leatherware, food and wine. There were also a potter, potting and a copper beater, beating. 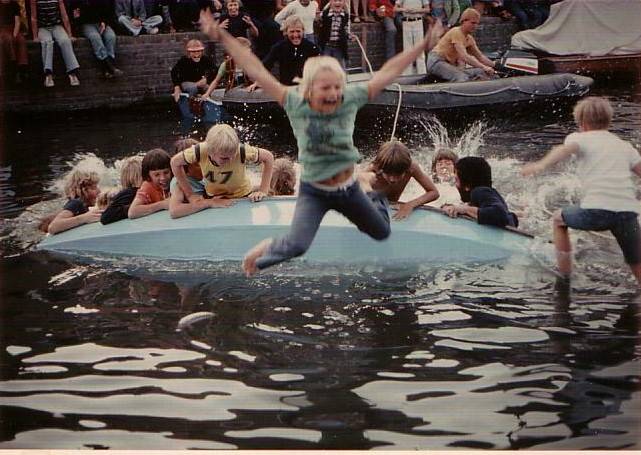 The ultimate was still to come. A Mirror was floating in the harbour and an attempt was to be made on the world record for numbers in a Mirror Dinghy. One by one, the number mounted and cheers as each person carefully boarded and sat down. Finally, with 27 on board, the Mirror sank, but the old world record had been smashed.

Thursday evening brought success at last to our family. Three hilarious games of bingo, during which every number called out, was greeted with shouts or jeers, according to how the cards were marked, and occasions when 86 was called as 98. Shades of Mecca! However, at the end we walked off laden with prizes which included 27 bars of soap. We couldn’t sail, but boy, were we clean! Someone even asked us if we were good at bingo, but I didn’t let on to the way I had tuned my pencil.

All too soon, Friday arrived, and with it, the Prizegiving Dance, at Monnickendam Sports Hall. Roy Partridge staggered away laden down with goodies, including the Asian plastic replica of the Empire State Building. Mark Rushall won the practice race and with it the Irish Trophy — an Arran sweater. Make sure you wash it well Mark, and darn any holes before you return it in 3+ years time.

The following day, goodbyes were said and promises given to correspond with new friends. We have a provisional date, next year for the Nuberg’s to visit us. So many old friends we had seen once again and new ones made. Who knows when we will see each other again. 1977 Nationals? Perhaps never, but we still will have some marvellous memories of the 1st Mirror International Week. As always, some things stand out, such as the very smart South African team, in their blazers, badges and ties, the sight of the Heineken Beer barrel towing eight Mirrors to the start on Friday, and finally, sitting down to breakfast with our hosts, but eating five seconds after them, in case we did something in the wrong order.

What can I say finally about the week? It was so well organised both sailing and socially, that it was almost unbelievable. So many people had worked so hard to make it a success, and they fully deserved all the thanks and congratulations they received. I don’t think I will make it to Australia in 3½ years time (my wife doesn’t like kangaroos) but those that want to— start digging.

All thoughts of graduating to a Laser have now gone: it has been rumoured that Chil-y-nik will soon be giving birth to a Mirror kit, and perhaps, one day . . .

We have 1610 guests and no members online