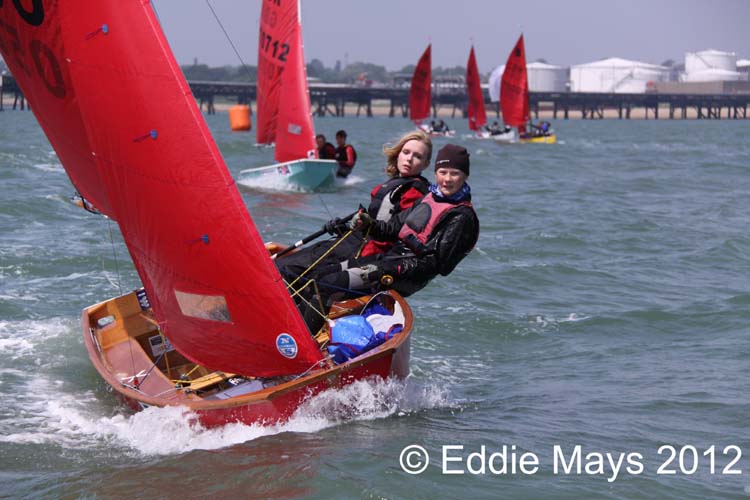 The rain stayed away from Southampton Water for the Diamond Jubilee Mirror Open Meeting to give the Mirrors two cracking days of sailing at Warsash for the latest round of the Southern Travellers series.

Fresh from having run the Spring Series, the experienced race team led by Jon Spencer ran 6 races over the two days - with winds gusting up to 25 kts on both days - a reoccurring theme of the 2012 season so far. Nine local boats were joined by five visitors in a fiercely competitive fleet with plenty of place changing at the top and punishing consequences for tactical mistakes or mis-judging the spring tidal stream. Max Odell and Findley Boon (Northampton SC) were the most consistent, revelling in the strong winds, counting three firsts to take the regatta by two points. They did not have it their own way with Jake Farren-Price (Royal Lymington YC) stepping into a Mirror for the first time to helm for Jenny Lorimer (Warsash SC) from race two - showing how an ex-Optimist sailor can easier transfer skills to the Mirror - immediately achieving two wins and good results in the top four to take second.  Rory Odell and Lewis Bowen (Northampton SC) were often hot on the heels of brother Max, demonstrating excellent boathandling skills in a breeze despite their relatively lighter weight. Clare Peterson and Jo Kalderon (Itchenor SC) had a good first day but a family holiday put paid to taking part on the Sunday. Eleanor and Rob Bellfield (Warsash SC) swapped helming duties and together achieved fourth. The highlight of the weekend was the number of new additions to the Warsash fleet - with several parents using the Mirror to introduce their children to racing. Bruce and Jess Mills (Warsash SC) took to the water for the first time in 'Scooby Doo' and showed flashes of speed that promises for the future. John and Harry Tolcher (Warsash SC) also christened their boat and hopefully will be back for more. The MCA demo Winder boat was in demand with Oscar and Scott Nemitz (Warsash SC) and Olly and Hannah Wilson (Warsash SC) using it over the weekend - they now all want new boats!