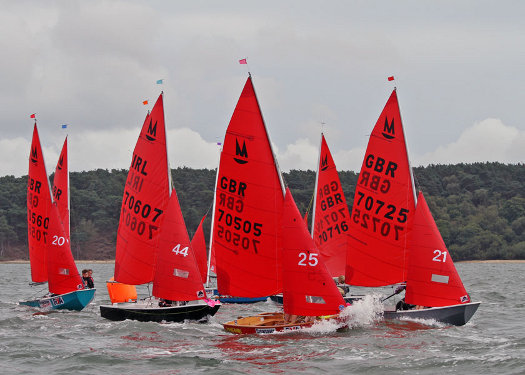 After a fantastic evening on the beach playing games including space hopers, wheel barrow races, rounders, volleyball and many more. The sailors had great fun and made friends across the country.

Tuesday morning was grey and dull with almost no wind but the Mirror sailors were not put off. After a 1 hour postponement, racing started in a South Westerly force 2-3.

2nd race got away 1st time and was all clear. Silver fleet sailors Joanne Kaldron & Ottilie Spruit sailed a cracking beat to lead the fleet at the windward mark. Joanne & Ottlilie held their lead down to the bottom of the outer loop. On the beat Sarah & George went left and overtook Joanna Ottilie who were playing the shifts up the middle.  Sarah & George opened the lead up again to finish 1st with Milly & Nick 2nd, Megan Boyland & Sadhbh Culleton racing in the silver fleet, from Ireland sailed a fantastic race finishing in 3rd.

After a General Recall, race 3 got away under a "Z" (20%) penalty flag. Rory & Harvey lead from the off followed by Will Hide & Emma Clayton then Milly & Nick. The race was rather short and, for the leaders, it turned into a procession as they finished in that order. A well deserved 4th place went to Matt Currell & Ben Shorrock  in "Benina Split" our visiting Cadet sailors.

We are looking forward to a two race day tomorrow in a bit more wind and sun!