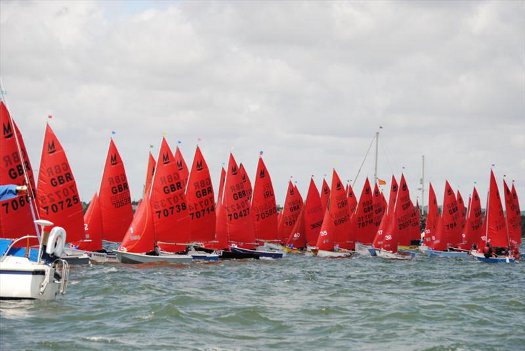 Day 3 of the Navigators & General Mirror Europeans started in 12 knots but it built steadily through the race. The race officer set off with an outer loop, we had an individual recall and five boats were over in the middle of the line.

The first beat was patchy and it paid to play the shifts. Rory Mackenzie and Harvey Martin worked the left hard closely followed by Nigel Thomas and Billy Vennis-Ozanne in second, Cian and Eoin Hickey in 3rd, 4th saw Martin Egan and "Cornish" Harvey Martin, 5th was father and son combo David and Daniel Coady.

The second beat saw a few changes with Martin Egan and Harvey Martin, and Edward Grayson and George Stainforth moving into 3rd and 4th. There were big place gains on the run due to big gusts coming down from the left.

The finish saw Rory and Harvey extend his lead, followed by Edward and George in second, Nigel and Billy in third and Martin and Harvey in 4th.

Race 2 of the day was an inner loop with three laps, the start was clean it caught a few people out as the tide was pushing the sailors under the line and into the pin end boat. At the first windward mark Rory Mackenzie and Harvey Martin lead from Isabel Davies and Milly Moss. Third around was Jack Maye and Sarah White from Ireland. Unfortunately the tide caught him out a little as he hit the windward mark, they didn't lose much with some efficient turns. Will Hyde and Emma Clayton were really close behind putting pressure on the top three.

The leeward mark saw the first gate, a bit of a challenge for the fleet to chose the right buoy. Rory and Harvey went round the left hand buoy unfortunately the kite went in the water. Isabel Davies and Milly Moss were close enough to take advantage and went into first place. Ireland's Jack Maye and Sarah White rounded in 3rd, closely filled by Nigel Thomas and Milly Pugh.

At the next windward mark the wind had steadily increased and due to a slip Rory had a brief swim, so Max O'Dell and Finlay Boon went into the lead! At the leeward mark we saw Max and Finlay in first, followed by Nigel and Billy, Rory and Harvey and Sarah and George Richards close behind. At the finish Rory and Finlay had extended a great lead, they were followed by Rory and Harvey who made a great recovery. Sarah and George Richards sailed a great last round and into third.

Tonight there is a get together for nations night. Sure there will be lots fun and frolics. Hope everyone will get lots of rest after a hard day on the water! Three races tomorrow in slightly less wind.