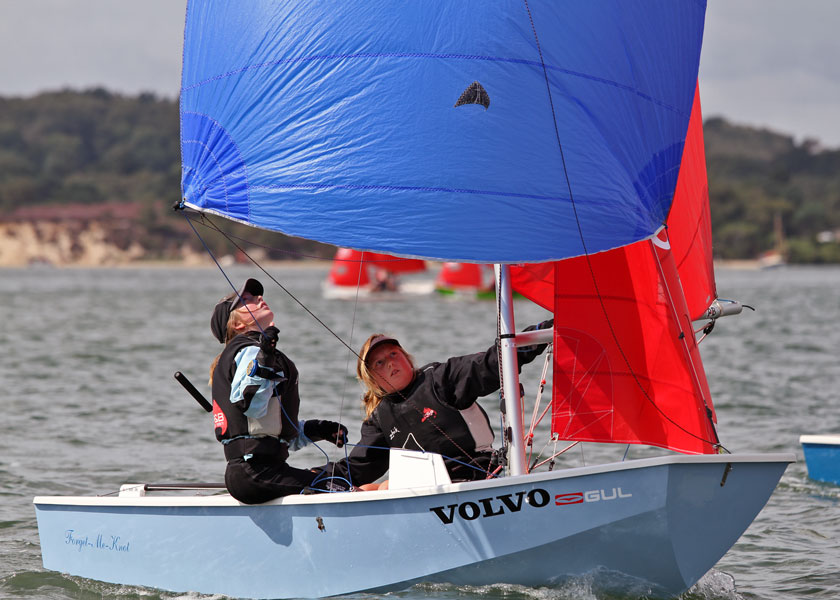 Day 4 of the Navigators & General Mirror Europeans started in beautiful sunshine and a light 5 knot breeze. The tide for the first time while racing was coming into the harbour. This posed a few difficulties as it was pushing sailors quickly up the beat!

That would have been alright if they had started. With a bit more breeze settling in a constant direction sailors managed to get away, with an individual recall but both boats returned and cleared with no problems. Most boats headed out into the stronger tide on the right. At the first windward mark Katie Davies and Gemma Keers rounded in first, Rory Mackenzie and Harvey Martin in second, Jack Maye and Sarah White from Ireland rounded in third.
Throughout the race Katie Davies and Gemma Keers and Rory Mackenzie extended there lead sailing away from the fleet. Sarah and George Richards lead the chasing pack with Midge and Harriet Watkins in 4th and Rebecca and Lauren Stephens in 5th.
By the end of the race Rory overtook Katie. The final results were Rory and Harvey in 1st, Katie and Gemma in 2nd, Midge and Harriet in 3rd, Rebecca and Lauren Stephens in 4th, and Will Hyde and Emma Clayton in 5th.

In race 3 the start was all clear, the best start was made by Midge and Harriet Watkins who started middle/ left of the line and then tacked and crossed 90% of the fleet. At the first windward mark Midge and Harriet lead from Rory and Harvey, Sarah and George and Isy Davies and Milly Moss. Midge held the lead for just over a lap when Rory and Harvey overtook. Midge and Harriet, Rory and Harvey, Sarah and George all extended away from the rest of the fleet and kept this till the finish. The battles took place behind this bunch between Isy Davies and Milly Moss and David and Daniel Coady and many others.

All the younger sailors have gone off to Splashdown for the evening. There is sure to be some more fun in the water before the final day of racing tomorrow.