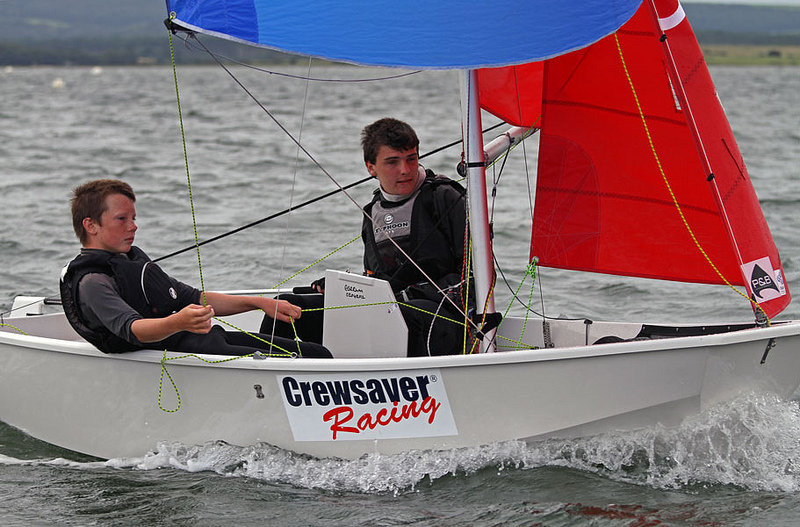 Day 5 of the Navigators & General Mirror Europeans started with overcast skies, a moderate breeze from the south east and a forecast of imminent rain, possible thunder and strong winds.

Once again the tide while racing was coming into the harbour and with a different wind direction, stratergies for the beats needed revising. The course was set as an inner loop trapezoid. The tide was strong and the wind anticipated to build through the day. The start was clear with Rory Mackenzie and Harvey Martin reaching the windward mark first, followed by Will Hyde and Emma Clayton and Milly and Nick Pugh. Positions held until the next beat when the wind went right, Rory and Harvey maintained their lead but the chasing pack changed. Lead by Midge and Harriet Watkins and Jo Kalderon and Ottilie Spruit. Again places were held on the run and the final beat saw Rory and Harvey extend their lead, now with David and Daniel Coady in second and then Midge and Harriet Watkins, Sarah and George Richards, Jo and Ottilie and Milly and Nick. It was all to play for and the battle continued right to the end! Rory and Harvey came first, Milly and Nick took advantage and came through to take second, Sarah and George Richards took third.

The first attempt to start the second race resulted in a general recall with boats crowding the Committee boat end so they could tack and go right up the beat. During the 2nd start sequence, rain and lighting could be seen approaching from the Purbeck Hills, so, with visibility decreasing racing was abandoned for the day.