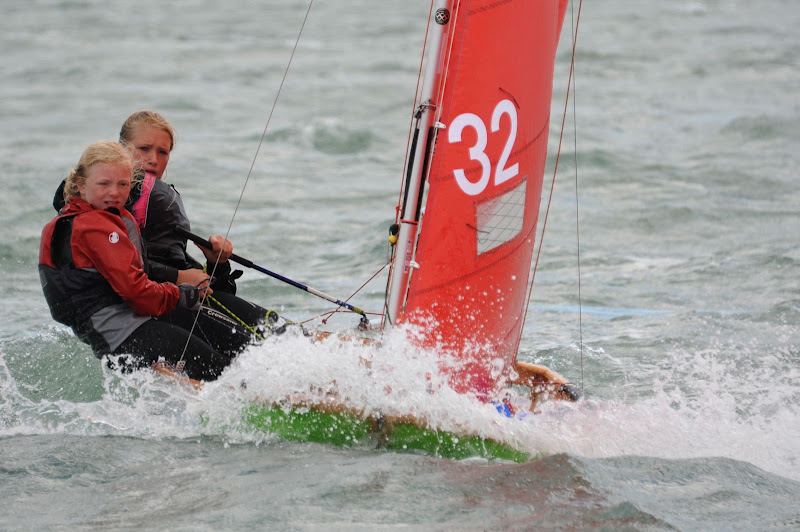 The fleet started launching at 9:00am wiith the wind around 20-25 knots and a tough day ahead.

Race 1 started with the tide flooding making it harder to cross the line. Ed Grayson & Gemma Keers in "Peanut" lead for the 1st lap but were overtaken by Max Odell & Finley Boon on the second beat.  There was chaos aboard "Hot Chilli" (ian & Zoe Walker) with the mainsheet coming undone and streaming astern on the run and the spinnaker sheet over the end of the boom on the 3rd lap. So they did well to recover to push Ed & Gemma, getting up to 2nd at one point on the beat before finishing 3rd behind Ed & Gemma.

Race 2 was competed with lots of capsizes and retirements. Ian Walker started about mid-line and went hard left which paid and he lead at the firt mark and held thge lead to the finish. Milly & Nick Pugh in "Wildcat" were 2nd with Max and Finley in 3rd

By Race 3 the tide was ebbing, increasing the size of the chop. Nigel Thomas and Billy Vennis-Ozanne started towards the pin end, avoided any stationary objects

, and shortly afterwards were able to cross the fleet to lead all the way to the finish. Dominic Gogarty & Charlie McGregor were 2nd ahead of Sarah Richards & Alexandr Baird in 3rd.

Having won race 1 and got a 3rd in race 2, Max & Finley capsized on top of a RIB, got a shroud around the engine and had to retire with a bent mast. The Odell's had planned ahead, so had a spare mast with them and the "pit crew" worked through the evening to get them back on the water for Friday's racing.

Thanks to Mary Pudney for taking and allowing us to use the photos, more on Mary Pudney's Picasa account.