It's not know which day the British Pathe newsreel was shot, but the Daily Mirror report for Monday's race also mentions rain. Oddly they say Pat Edyean and Veronica Moore of Plymouth in dinghy No 7 were the eventual winners. There is no mention of Pat Edyean and Veronica Moore in any of the Daily Mirror reports (below), so I've no idea what the newsreel reporter thought they had won.

The event was pre-viewed in Who's for a race with the great Mirror armada?

The following story appeared in the Daily Mirror, Monday 10th August 1964, page 5 so the report text is © Daily Mirror. Also thanks to the www.britishnewspaperarchive.co.uk .

The mysterious hammering in the boiler-room baffled sailors at the Royal Naval Barracks, Devonport until they discovered it was the CO at work. Commodore George Leslie was building a Mirror Class dinghy. Monday, and for the rest of he week, the Commodore's boat and sixty other red-sailed Mirror dinghies will be racing at Plymouth for trophies presented by famous Daily Mirror writers. The Commodore is on duty in Ireland, so his dinghy will be sailed by local champion David Wines.

The following story appeared in the Daily Mirror, Tuesday 11th August 1964, page 9 so the report text is © Daily Mirror. Also thanks to the www.britishnewspaperarchive.co.uk .

Red sails in the Sound

A fleet of Mirror dinghies from all parts of the country battled in driving rain in Plymouth Sound yesterday. The boats were competing in the Mirror Class National Championships. The first events in the Championships, which go on all week, were seen by thousands of holidaymakers on the Hoe above the Sound during sunny spells. The red-sailed dinghies will be racing for awards presented by famous Mirror writers. Yesterday's results were: 1, B. B. Toms (Spectre) ; 2, D. Wines (Jaunty Jen) ; 3, A. E. Francis (Jalce? Jaytee?); 4, W. A. Durnett (C-Mu); 5, R. F. Tucker (226).

The following story, by Paul Hughes, appeared in the Daily Mirror, Wednesday 12th August 1964, page 2 so the report text is © Daily Mirror. Also thanks to the www.britishnewspaperarchive.co.uk . 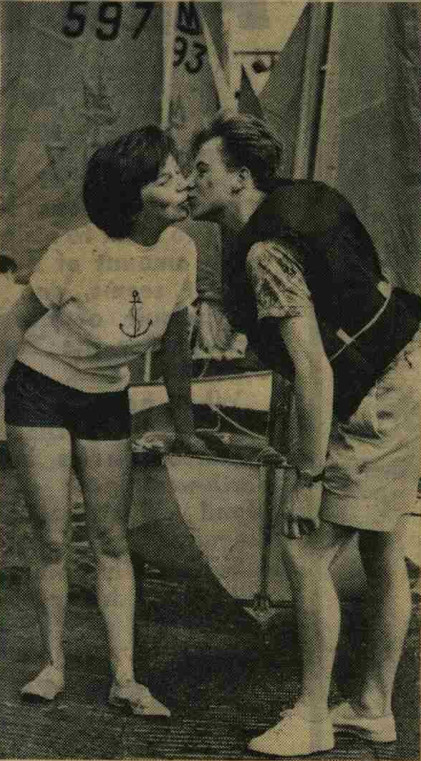 A kiss for luck by the honeymoon couple, above, just before they set sail—for a race in their home-made dinghy. Bride Janet, 22, a teacher, from Nottingham, and laboratory technician Mike Hickinbottom, 21, married on Saturday. And after the reception they set off for Plymouth to spend their honeymoon racing in the Mirror Dinghy Cass National Championships.

“We made the boat while we were courting.” said Janet. “And we were so keen to finish it in time for out honeymoon that we worked very late and finally hoisted the sails in the moonlight."

Boats are racing each day this week in Plymouth Sound for trophies presented by Mirror writers: the Peter Wilson Trophy, Cassandra's Cauldron and Proops's Pot. There were fifty-nine starters in the second race of the championships yesterday.

The following story appeared in the Daily Mirror, Thursday 13th August 1964, page 3 so the report text is © Daily Mirror. Also thanks to the www.britishnewspaperarchive.co.uk .

The boat that Commodore George Leslie built in a boiler room is leading on points in the Mirror class dinghy National Championships at Plymouth, Devon. The Commodore built his boat, Jaunty Jen, in the boiler room at Devonport Barracks, where he is commanding officer.

Commodore Leslie is on duty in Ireland. But his dinghy, sailed by David Wines, 18, has been among the leaders in every race during the week’s championship events.

The following story appeared in the Daily Mirror, Friday 14th August 1964, page 18 so the report text is © Daily Mirror. Also thanks to the www.britishnewspaperarchive.co.uk .

Bearded dental surgeon Brian Toms, 29, took the lead yesterday in the Mirror Class Dinghy. National Championships at Plymouth. Brian, who recently left the Navy after serving as a Surgeon-Lieutenant on the 20,000-ton repair ship HMS Ausoria, said: "My Mirror dinghy has given me lots of thrills.”

The following story, by Paul Hughes appeared in the Daily Mirror, Saturday 15th August 1964, page 2 so the report text is © Daily Mirror. Also thanks to the www.britishnewspaperarchive.co.uk .

Dentist Brian sails in to Victory

Bearded dental surgeon Brian Toms, 29, with a 12-year-old Sea Scout as crew, won the title of "Mirror Dinghy champion" at Plymouth yesterday. Brian, a former dental surgeon-lieutenant in the Royal Navy, from Kingsbridge, Devon, secured the title with two FIRST places, one THIRD, and a FOURTH in the championship races this week.

More than 60 of the red-sailed dinghies from all over the country competed in the championships, organised by the Mayflower Sailing Club, Plymouth.

Thousands of holidaymakers watched from the grassy banks of the Hoe, overlooking Plymouth Sound. - There were three cups presented by famous Mirror writers: the Peter Wilson Trophy, Cassandra's Cauldron, and the Proops's Pot.

Marjorie Proops personally presented her own trophy to 16-year-old Linda Cole, the most successful helmswoman. Prizes were handed to the winners at a reception for competitors, given by the Lord Mayor of Plymouth, Alderman Harry Watkins, at the Guildhall.

We only know the winners and runners up.

Boats were kept in what is now a car park adjacent to the now defunct Mayflower Sailing Club on the Barbican and launched down the adjacent slipway.

There are also some photographs by Eileen Ramsay, 71366 & 71364 are of this event, hover your cursor to see an enlarged view & details.