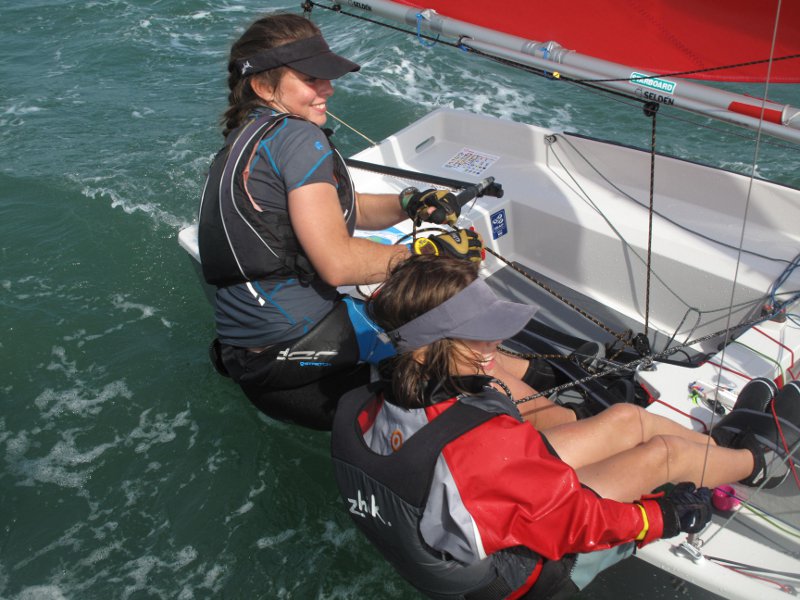 Mirror Class rules allow the mainsheet to be rigged so it comes to the helm from either the aft transom or from near the centre of the thwart (seat) or directly from the centre of the main boom. Traditionally Mirror dinghies had an aft mainsheet with a 2:1 purchase. Since centre mainsheets have been allowed, they have become standard on new boats.

The UK MCA recommends that children are taught to sail on boats with a centre mainsheet as this is now the standard system on nearly all dinghies sailed in the UK (Optimist, Pico, Topper, 420, 29er,....). It allows children to move to, and from, Mirror dinghies without having to learn to tack in a different manner.

One disadvantage of these systems is that, in general,  they constrain the space available for the crew between the kicking strap and the mainsheet when tacking and gybing. Options for giving more space are:

Below are links to descriptions of the most common centre mainsheet systems. Within each system there are often further options for fittings or other equipment. In each case a bridle, or split tail, attached to the transom is used. The attachement points on the transom are controlled by the class rules, at the time of writing (2018), this was as follows:

1.7.5 The distance between the centres of the mainsheet attachment points on the transom - Minimum 450mm, Maximum 500mm.

Bridle with purchase and central block

Bridle with purchase direct from boom

The current rules would allow a Oppie/420 style mainsheet where the mainsheet and mainsheet blocks are only attached to the central block behind the thwart and the middle of the boom. However, I can find no examples of anyone actually doing this on a Mirror, probably because when you try to centralize the boom, this system puts a large load on the leech, exactly what you don't want in a light/moderate breeze.