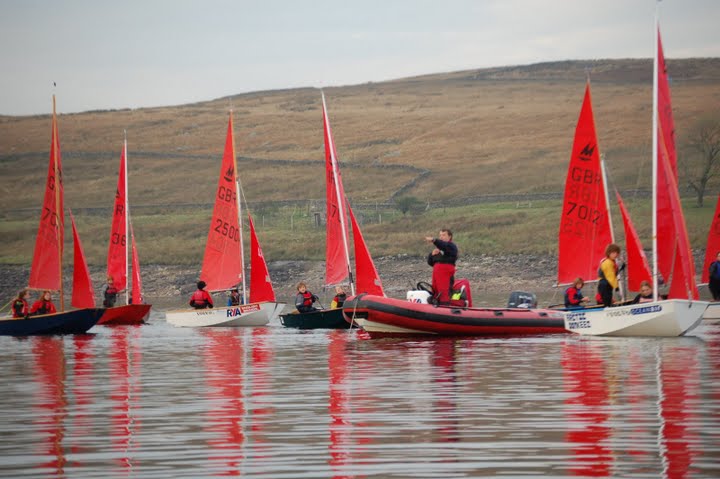 On Thursday 29th October 16 Mirror dinghies came to Yorkshire Dales Sailing club. A range of people attended from national junior squad members to recent Mirror converts who had just started sailing. They all had in common a desire - to have fun!

Yorkshire Dales SC was the perfect venue with its brand new clubhouse, a stark contrast to the portacabins which were the changing rooms for the last 15 years.

Once everyone had rigged their boats and eaten a few too many bacon butties for the current wind conditions, we all piled into the new training room, which was fitted with impressively bright orange chairs! Our head coach for this couple of days was Dave Woodhead who coached the national zone squad last year and will be coaching the northern zone squad in 2010. Beth Gray who has had many successes in the Mirror with her brother Ed was assistant coach. They recently won the Inland Championships at Windermere.

In the morning, there wasn’t much wind and the exercise we were doing (round the clock) wasn’t going very well because there wasn’t enough breeze. Despite extensive patience and determination by all sailors our coach decided that the wind wouldn’t be coming any time soon and sent us in for an early lunch. The bright sunshine and light winds contributed to an excellent lunch on YDSC impressive balcony with panoramic views over the spectacular North Yorkshire Moors.

When everyone had filled up with tasty Pizza and chips, we split into two groups: those who wanted to use the spinnaker and those who weren’t yet ready. This windward, leward exercise was more successful as there was now some wind. Everyone went home feeling happy with a good day’s sailing.

Friday morning looked more promising with patches of wind which were slowly turning into a more constant breeze. We had another go at the  ‘round the clock’ exercise that we had tried and failed at yesterday. It worked!  Everyone went into lunch feeling like they had achieved something. When everyone had filled up on another tasty lunch, there were a series of short races to put what we had learned into practice. When we had all come in, packed our  boats away and got changed, the kids drank coke and Tango and the adults talked about some MCA stuff.

This was a great couple of days training which brought together sailors from Otley SC, Yeadon SC, Beaver SC, Peninne SC, Ripon SC and Ogston SC.

Thanks to everyone who organized it