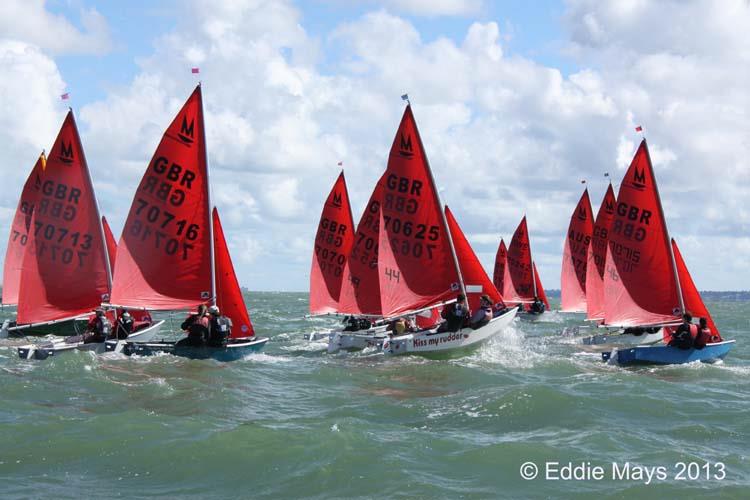 On Saturday 7th september the 3rd Neilpryde Nationwide event and Southern Championships was happening at Hill Head SC. This was also a southern traveller and national squad qualifier meaning a good turn out of 29 boats. The event kicked off with no wind therefore causing a slight delay to the start time. The wind filled in quite soon after the AP flag was raised enabling the sailing to start.

Once all the boats got out on the water the wind started to fill in a bit more making it perfect for sailing. The first Mirror start got underway causing a general recall after many boats were over the line. We then had to start after the Toppers which were also having an event there. The race team started us with a black flag meaning if anyone was over the line in the one minute they would be disqualified. It was a clean start for the Mirrors. At the windward mark Nigel Thomas and William Rayner from Hillhead SC rounded first closely followed by Gemma Keers and Imogen Bellfield  from Itchenor SC. As the race went on the wind got stronger allowing Tom Cosier and Nick Pugh to edge through the fleet coming round the windward mark in 3rd. Unfortunately Nigel had several problems when coming down the sausage allowing Tom to go past with the finishing results being Gemma Keers 1st, Tom Cosier 2nd and Nigel Thomas 3rd.

The second race got underway with a black flag straight away making everyone fairly cautious. The finishing results were the same as the 1st race in which Gemma came first. Tom came 2nd and Nigel came 3rd. 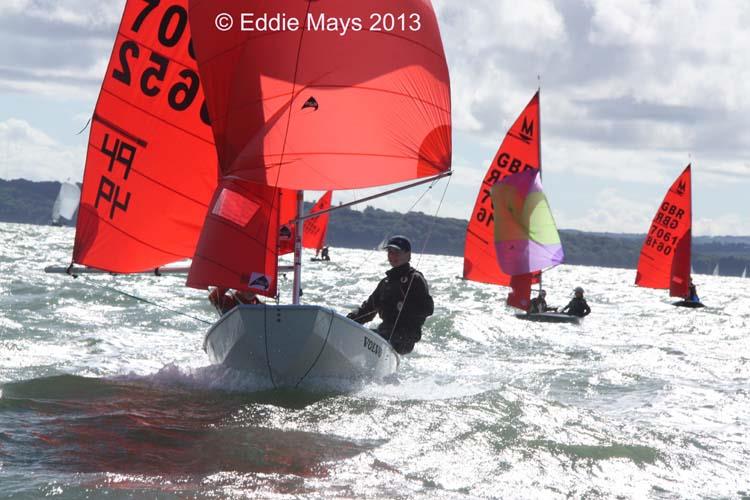 The 3rd race was the windiest out of the 3 which benefited Tom and Nick enabling them to win. The finishing results were Tom 1st, Gemma 2nd and Nigel third again. 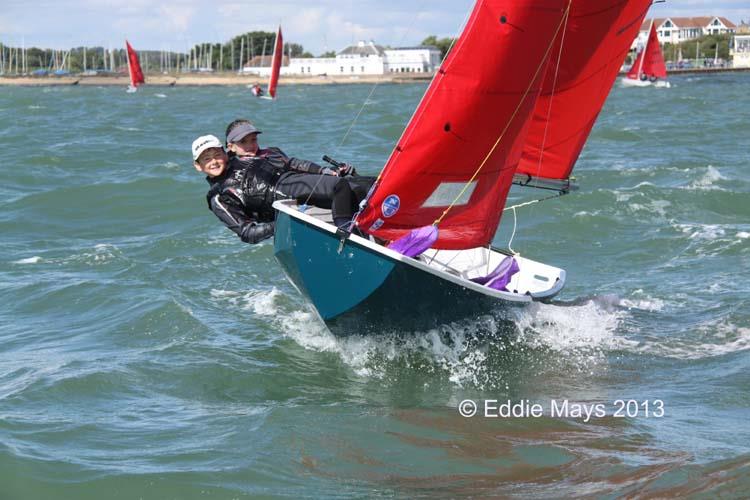 Day 2 of the event brought lighter winds at first, but as we launched it grew into a significant breeze. The first race got underway for the Mirrors with a Black Flag and after a hard working beat (the first of many!), Tom Weston & Paddy Jefferies were fighting it out at the front with Nigel Thomas, with Gemma Keers next and Tom Cosier finishing up the front pack. The positions continued to shuffle between this group, but in the end it was Nigel who took 1st, Tom Weston 2nd Gemma 3rd and Tom Cosier 4th.

In the second race, a dark cloud loomed over the race course bringing higher winds, which proved a challenge to some people. Again, Tom Weston took the lead at the windward mark with Tom Cosier and Nigel hot on his heels. After another torturous beat, both Toms had pulled ahead of Nigel but the wind suddenly increased dramatically, and both boats (with spinnakers up!) screamed off downwind. Tom Cosier and crew Nick Pugh pulled ahead due their preference to stronger winds, but Tom and Paddy capsized, leaving Tom Cosier to take 1st.

The 3rd race started with Tom and Nick getting an early lead, but lost it on the reach across to Tom Weston. The 2nd beat started and Tom Cosier saw on the Committee Boat that he had been black-flagged. Tom Weston went on to win the race, with Nigel 2nd and Esme Shepherd 3rd.

With the top 3 boats all on 10 points, nobody was sure who had won, but when the results came out Tom Cosier and Nick Pugh had won on count back, with Nigel Thomas 2nd and Gemma Keers 3rd. Overall it was a great event with great sailing and competitiveness.