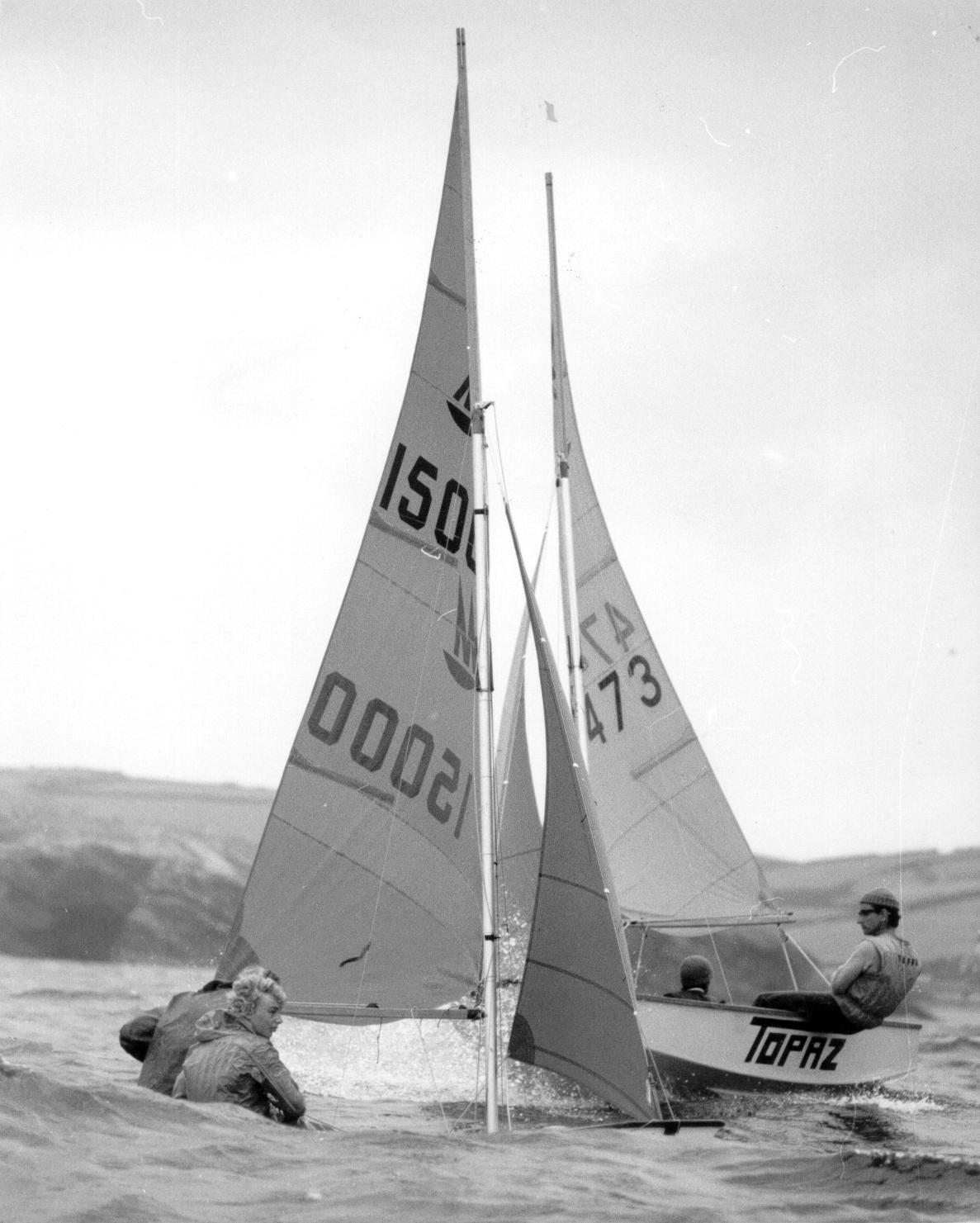 Dave Sherwin led throughout the race, from Colin Gardiner of Forfar S.C., who was disqualified when he forgot his safety tag. Graham Ellis made a poor start, but came up from the twenties to finish in second place. There was a tremendous tussle throughout between Harry Prangnell and Mark Rushall. The World Champion, Roy Partridge, retired early in the race following a port and starboard incident. Welcome “far-flung” (but paid up!) Association Members were Frank Havik and Monique Janssen of Monnickendam, the Club who acted as hosts for the World Championships, and Grant Nicholls. who arrived at Newquay via Holland from Melbourne, Australia, and borrowed the Flag Ship.

Many competitors overstood the windward mark because of the tides, which also caused several unpremeditated gybes on the downwind leg of the Olympic course. The wind freshened slightly throughout the race, but was never more than a force 2. Waves were a little confused, especially at the start of the beat. Good anticipation of the veering winds on the part of the Race Officer meant that the beat, which was biased at first, was true on the last windward leg to the finishing line.

All competitors expressed great pleasure at being once again entertained by the quiet efficiency of Newquay Sailing Club, under Commodore, John Turver.

The wind increased from a force 2-3 to a force 5, gusting 6, with confused seas. The northerly winds veered westerly, giving a tremendous lift on the first beat, and allowing the use of spinnakers, before it went back to the north. The Club reckoned there was a twenty-foot ground swell.

Many competitors returned from the finishing line under jib only, and of 135 starters, the sea and the wind claimed 50, leaving 85 to finish. One boat had to be lifted in pieces aboard the Committee boat; a metal mast developed a right-angle, and there was considerable breakage. The veering wind on the first beat caused great congestion on the gybe mark.

The first three to finish maintained their positions at each windward mark throughout the race, but there was a tremendous changing of position down the fleet, where 24 Cornish boats, and a total of 51 different Clubs were battling with the elements.

The World Champion, Roy Partridge, led for the greater part of the race, capsized before the last gybe mark, managed to right himself, and finished 48th. His comments afterwards were “Wet suits? I don’t take a wet-suit because you never capsize a Mirror”.

The second race was postponed because of surf in the mouth of the harbour, which would have made launching totally impossible. However, half-an-hour later, 123 Mirrors set off under brilliant sunshine, with a force 4 wind, and a difficult, lumpy sea. Although Roy Partridge led for most of the way, defending Champion, Mark Rushall, was breathing down his neck. Only ten seconds behind at the third windward mark, Mark Rushall lost to the reigning World Champion by twenty seconds at the finishing line. The last beat  was a superb tacking duel between the World Champion and the defending Champion, with the more experienced man just maintaining his control. A newcomer to the top ranks is Lt. Cmdr. Smallwood of Stokes Bay.

Disregarding any discards, at this stage in the week the overall winner on points was Harry Prangnell, last year’s Western Area Champion who unfortunately failed to qualify, despite predictions, for the World Team to go to Holland. Harry is now back on form, and sailing very consistently in the top five at the National Championships.

A fleet of 136 set out in a lumpy sea, with force 1-2, which freshened to a fairly steady force 3 during the race. Shifting wind on the start line favoured a late start through the gate, and some starters were grievously left. The sea claimed fewer casualties, as 130 of the boats finished. There were a considerable number of protests, and, as the single-handed race also took place on the same day, it was difficult to get the overall positions accurately until all the protests had been heard. It is enough to say that at the top, but not necessarily in this order, were Harry Prangnell, Chris Maxfield, Peter Robinson, Trevor Smith, Graham Ellis, Mark Rushall, Roy Partridge, Chris Owen and Chris Sidey. A welcome return to the top ranks is Derek Beere of I.P.C. (Iver) Y.C., a past National Champion and European runner-up in 1973.

Cohn Gardiner, who actually finished third in this race, qualifies for the sob story of the week. Disqualified from the practice race, when he finished second but had forgotten his safety tag, he was disqualified from the third points race, having finished third, because the position of his thwart contravened the design. Like the sportsman that he is, Cohn worked hard to put his boat into Class, and accepted very graciously the Committee’s decision.

The Committee carried out their intention to measure the top three boats from each race.

The Race Committee postponed the start for an hour and a half, due to surf at the mouth of the harbour. The wind, force 3-4, dropped throughout the race, which was quite a short one owing to the need to get the dinghies back through the harbour entrance before they ran any risk of being caught in the surf and swept ashore in pieces. With bright sunshine and white horses, the fleet looked its usual picture, but the sea was much choppier than the wind conditions appeared to warrant.

With a complete change in the leadership, and three new boats requiring measurement under the Committee’s decision to measure the first three of every race, it was interesting to note that 17342 and 17349, both seven-year-old boats, proved that a new boat is not essential to victory.

Roy Partridge’s consistent position in the top of the fleet proves conclusively that mature years are no handicap! At the end of each race there is a positive gleam in the eye of all the over-thirties, when they assess Roy’s position in the race and realise that their day is by no means done.

With protests making it impossible to assess the overall positions at this stage, and with the Championship still wide open, possible winners could be Harry Prangnell, Roy Partridge, Dave Derby, Mark Rushall or Graham Ellis, in other words, the fleet which represented the United Kingdom in Holland, with Harry Prangnell managing to keep ahead of World Runner-up, Chris Owen.

Graham Ellis won the single-handed race, and newcomer to the Committee, Deborah Evelyn. showed the girls that, even among such illustrious competition, third place was attainable.

Boats were away to the start of the final race with a wind force 2, variable. Everything depended upon the outcome of this race, and the top ten helmsmen were fighting it out. Roy Partridge did not have a good start, but, with the winds steadying and increasing, he improved his position, particularly on the last beat, and managed to finish fifth. This meant the final results were about the keenest we have ever experienced, with World Champion, Roy Partridge, leading from Harry Prangnell by a quarter of a point, with Harry holding off Graham Ellis by the same margin.

A  couple of photos of the fleet launching, kindly provided by Newquay Sailing Club

This was once more a more successful Nationals. Ernie Radcliffe, as Race Officer, deserved the thanks of the entire fleet, and other members and officers of Newquay Sailing Club gave up at least a week of their holiday to tend to our every need. We have been to Newquay now three times for a National Championship. It is among the venues that cause least headaches to the Association, and, as in the case of our report on the Rally, we can only close with the words “When can we come back?”.