The 14th International Mirror Class World Championships were officially opened last night on yet another beautiful night in Albany.  Event Director, Anthony Galante, on behalf of the Princess Royal Sailing Club and its members recognised the cultural and spiritual links that Noongar people have to the land and sea, and acknowledged the traditional owners of country know today as Albany or Kinjarling, or place of the rain.

Mineng Elder, Alwyn Coyne, welcomed the competitors in a traditional welcome to country which was followed by traditional dances by the Kinjarling Yoorls, a group of Aboriginal dancers.  Backed by troup leader, Ryan Humphries on didgeridoo, the group of boys and men performed a number of dances including the "Wind Dance."

Commodore Paul Terry and President of the International Mirror Class Association, Celia May, welcomed the sailors and wished them well in the Event.

The mixing of the waters from the UK, Ireland and South Africa with water from Princess Royal Harbour was performed by Reverend David Hosking. 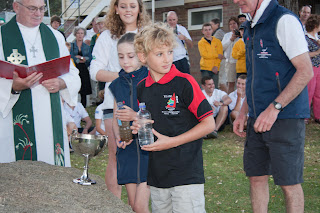 The sailors were also anointed by the Reverend prior to the final address by the Member for Albany, Mr Peter Watson MLA who officially opened the Championships.
The Mirror Class Flag which has travelled from Championship to Championship was raised by Alwyn Coyne and City of Albany Mayor Milton Evans, prior to the buffet dinner in the marquee.
A large crowd partied into 2011 witnessing the spectacular fireworks that lit up the Albany sky.  ?
Empty

Ross from IRL secures his second Mirror Worlds Crown to add to the 2005 title won in Sweden.

With only 5.2 points separating the top 2 boats the final day of the 2011 Mirror Worlds started with an air of expectation with the dinghy park buzzing about the battle that would commence shortly to determine the World Champion.Lively conditions greeted the competitors again with the competitors growing to expect the fresh wind in Albany.  The course was bathed in sunshine.

Day 4 of the 2011 LandCorp Mirror Worlds started with a fresh sou-westerly with the fleet bathed in sunshine.  Hard work was the motto of the day for sailors in the 15-18 knot breeze.


A clean start was the order of the day, with most of the fleet going to the left.  By the top mark, the Championship leaders, GBR's Millie Newman and Jessica Rust rounded first followed by the Irishmen Ross Kearney and Max Odell and the Philippino pair Balladares and Chavez.

When the competitors arrived today for the start of day three, there was little breeze and warm sunshine which bathed the competitors.  By the time the boats took to the water, the breeze had picked up from the north bringing a warm breeze to the middle of Princess Royal Harbour.