ASC have acquired three training Mirrors, which were repaired and equipped with new Bermudan rigs to make them more efficient and user friendly.

The boats were used in the August Training Week, and proved very popular with the young sailors. They have been sailed / raced a few times since. A little maintenance is now needed on two of the boats. I hope to carry this out in the next few weeks.

Sail With Your Kids (by Dave Sword, Loch Tummel SC)

It looks like this year will see a re-birth of the Mirror fleet, as an in-creasing number of parents take the ‘Fastest crew under 4 feet’ option. So get out to the shed / garage / garden and blow the dust and cobwebs off that old Mirror so you can join the fun. 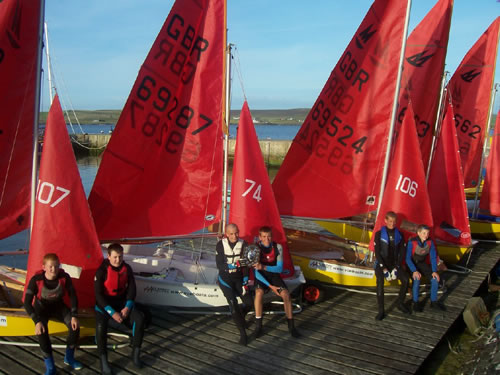 Northlink Ferries sponsored the Shetland Sailing Centre to take junior sailors to a national training event on the Scottish Mainland, and to attend the Mirror European Championships in Slingo, Ireland in Summer 2010.

The last couple of months have seen some close racing, and interesting events, in the Scottish Area.

Congratulations to father and son team, David and Andrew Gibb, from Chanonry S.C. for winning the Mirror Class at Findhorn Week in July, and also winning the “four seasons” trophy for being best of the class winners of the week. On August 20/21, Helensburgh S.C. commemorated the birth of local hero John Logie Baird, inventor of T.V., by putting on a super open event, generously sponsored by Grundig — thanks to them for providing truly magnificent prizes.